Radical Fiber: A Symposium on Art and Science

Free and open to the public.

Registration required for each session.

Join us Friday, January 28–Saturday, January 29, 2022, for Radical Fiber: A Symposium on Art and Science to explore the intersections of textiles with sustainability, digital technology, mathematics, and more. The symposium is being held in conjunction with the exhibition Radical Fiber: Threads Connecting Art and Science, which opens January 29, 2022, and explores the ways in which fiber-based practice has and continues to influence scientific theory, pedagogy, and innovation.

The symposium, originally scheduled to be in person, will now be online. Please register for each session below to receive the Zoom link. Visitors are welcome to see the exhibition in person during regular museum hours.

All times are Eastern Standard Time

11 am–12 pm: Curator’s tour of the Saratoga Springs Satellite Reef
Register via Zoom.
Part of the worldwide Crochet Coral Reef project by Christine and Margaret Wertheim and the Institute For Figuring.
1–1:15 pm: Welcome
Register via Zoom.

4–4:30 pm: Day 1 Discussion
Register via Zoom.
A Zoom conversation open to all attendees to meet and talk about the first day of the symposium. Moderated by Associate Curator Rebecca McNamara.

See the schedule for Saturday, January 29.

Together, the symposium and exhibition embrace the values of cross-disciplinary collaboration and engagement and especially highlight the value of artists to offer solutions to our most challenging questions today. We will think creatively about the future of textiles—their role in our lives historically and how moments of scientific progress in textiles can inspire future innovation, their technological possibilities for social good, the need for a more sustainable and climate-friendly textile industry, and more.

Radical Fiber: A Symposium on Art and Science, January 28-29, is funded by the generous support of The Alfred Z. Solomon Residency, which brings notable scholars, artists, and critics to Skidmore to address a wide range of issues in the visual arts.

Elissa Auther is Deputy Director of Curatorial Affairs and William and Mildred Lasdon Chief Curator at the Museum of Arts and Design. She provides the strategic direction and creative oversight for exhibitions, publications, and exhibition-related public programming. She has published widely on the history of modernism and its relationship to craft and the decorative, the material culture of the American counterculture, and feminist art. Her book, String, Felt, Thread: The Hierarchy of Art and Craft in American Art, focuses on the broad use of fiber in art of the 1960s and 1970s and the changing hierarchical relationship between art and craft in the period. Her exhibitions include West of Center: Art and the Counterculture Experiment in America, 1965–1977; Pretty/Dirty: Marilyn Minter; Senga Nengudi: Improvisational Gestures; and Surface/Depth: The Decorative After Miriam Schapiro. Her next exhibition for the Museum of Arts and Design is Queer Maximalism x Machine Dazzle.

Dario Robleto is an artist, researcher, writer, and teacher based in Houston, Texas. He has exhibited his work extensively since 1997 at museums such as the Menil Collection and the Whitney Museum of American Art. His work has been profiled in numerous publications and media including Radiolab, Krista Tippet's On Being, and The New York Times. He has been a visiting scholar and artist-in-residence at the Smithsonian Museum of American History, the SETI Institute, the Robert Rauschenberg Residency, and the Radcliffe Institute for Advanced Study at Harvard University. He is currently serving as Artist-at-Large at Northwestern University’s McCormick School of Engineering and the Block Museum of Art. In 2016 he was appointed as the Texas State Artist Laureate. In 2020, he was a research consultant to the popular science television series, Cosmos: Possible Worlds, which aired on National Geographic and Fox.

John Sims is a multimedia mathartist, writer, and activist who creates projects spanning mathematics, art, text, performance, and political-media activism. He has worked at the forefront of mathematical art for twenty years. At Ringling College of Art and Design in Sarasota, Florida, he designed a visual mathematics curriculum for artists and visual thinkers. He co-curated the 2002 exhibition MathArt/ArtMath and created a system of fifteen mathematical art exhibitions called Rhythm of Structure, including a year-long 2009 Bowery Poetry Club exhibition/film project. This work led to his own exhibition, SquareRoots: A Quilted Manifesto, featuring mathart quilts made in collaboration with Amish quilters, and the creation of the Pi Day Anthem. He has lectured and exhibited nationally and internationally, and his work has been featured in The New York Times, Al Jazeera, Guernica, Art in America, Sculpture, FiberArts, Science News, NBC News, Nature, and Scientific American, among other publications. He has written for CNN, Al Jazeera, The Huffington Post, Guernica, the Rumpus, and the Grio.

Jeffrey Splitstoser has studied ancient Andean textiles for over twenty years, having recently discovered (with Tom Dillehay, Jan Wouters, and Anna Claro) the world’s earliest known use of indigo blue in a 6,200-year-old cotton textile from the site of Huaca Prieta. Splitstoser specializes in Wari khipus, colored-and-knotted-string devices Andean peoples used to record information. He co-curated (with Juan Antonio Murro) the 2019 exhibition Written in Knots: Undeciphered Records of Andean Life for Dumbarton Oaks in Washington, DC. His research includes reproducing khipus and textile structures he encounters: processing, spinning, and dyeing the fibers, and growing cotton and dye plants. Splitstoser is guest editing volume 49 of the Textile Museum Journal, whose topic is mathematics and textiles. He is a research professor at George Washington University and the vice president of the Boundary End Archaeology Research Center. He received his PhD in anthropology from The Catholic University of America, Washington, DC.

Daina Taimina was born in Riga, Latvia, where she received her formal education, including completing a PhD in mathematics in 1990. She created the first crocheted hyperbolic plane for use in a non-Euclidean geometry class she taught at Cornell University twenty-five years ago, in 1997. Since then, she has crocheted many more, turning a geometric model into a fiber artwork. Taimina has given many public lectures and invited talks and participated in art exhibitions around the world. In 2021, her installation Dreams and Memories was exhibited at Riga Contemporary Art Biennale. Taimina’s book for general audiences, Crocheting Adventures with Hyperbolic Planes (2010), received The Diagram Prize from the Bookseller magazine and was awarded the Euler Prize from Mathematical Association of Americas in 2012; the book was updated as a new edition in 2018. Taimina’s art, which has inspired numerous other fiber artists who are now using her ideas in their own work, is in the collections of the Cooper Hewitt Smithsonian Design Museum; the National Museum of American History; Art in Embassies, the US State Department program; the Institut Henri Poincaré; and in numerous other public and private collections.

Stephen Ornes is an award-winning math and science writer who loves finding and telling stories at the intersection of science, math, art, and culture. He writes from a shed in his backyard in Nashville, Tennessee, and is a writer-in-residence at Vanderbilt University. His work has appeared in Scientific American, Wired, Undark, Discover, Science News for Students, and other outlets, and has been anthologized in the Best American Science and Nature Writing series. His book Math Art: Truth, Beauty, and Equations highlights the work of artists who find inspiration in the ideas, proofs, and visualizations of mathematics. He also produced and hosted Calculated, a short podcast series to accompany the book. The podcast won the Miller Audio Prize from the Missouri Review. 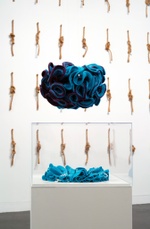