An Evening with Joy Harjo

Free and open to the public

For the latest guidance on visiting, please see our Visit webpage

The Skidmore College Department of English is pleased to welcome three-time National Poet Laureate Joy Harjo as the inaugural guest in the Identity, Race & the Global Imagination reading series. The reading will be Thursday, March 2, at 8 pm, in the Payne Room, and will be followed by a reception and book signing.

The program will include ASL interpretation by Liz Beauregard.

This event is co-sponsored by the Tang and is free and open to the public.

In 2019, Joy Harjo was appointed the 23rd United States Poet Laureate, the first Native American to hold the position and only the second person to serve three terms in the role. Harjo’s nine books of poetry include Weaving Sundown in a Scarlett Light, An American Sunrise, Conflict Resolution for Holy Beings, How We Became Human: New and Selected Poems, and She Had Some Horses. She is also the author of two memoirs, Crazy Brave and Poet Warrior, which invites us to travel along the heartaches, losses, and humble realizations of her “poet-warrior” road. She has edited several anthologies of Native American writing including When the Light of the World was Subdued, Our Songs Came Through — A Norton Anthology of Native Nations Poetry, and Living Nations, Living Words, the companion anthology to her signature poet laureate project. Her many writing awards include the 2019 Jackson Prize from the Poets & Writers, the Ruth Lilly Prize from the Poetry Foundation, the 2015 Wallace Stevens Award from the Academy of American Poets, and the William Carlos Williams Award from the Poetry Society of America. She is a chancellor of the Academy of American Poets, Board of Directors Chair of the Native Arts & Cultures Foundation, and is artist-in-residence for the Bob Dylan Center. A renowned musician, Harjo performs with her saxophone nationally and internationally; her most recent album is I Pray For My Enemies. She lives in Tulsa, Oklahoma. 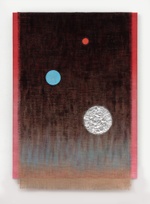 Parallax: Framing the Cosmos
Exhibition
i
Pattern by Atlan Arceo-Witzl ’18
Inspired by the exhibition Other Side: Art, Object, Self
The Tang Pattern Project celebrates the Museum’s 20th anniversary. Organized by Head of Design Jean Tschanz-Egger, past and current Tang Design Interns created patterns inspired by the Museum’s exhibition and event history.
See all patterns