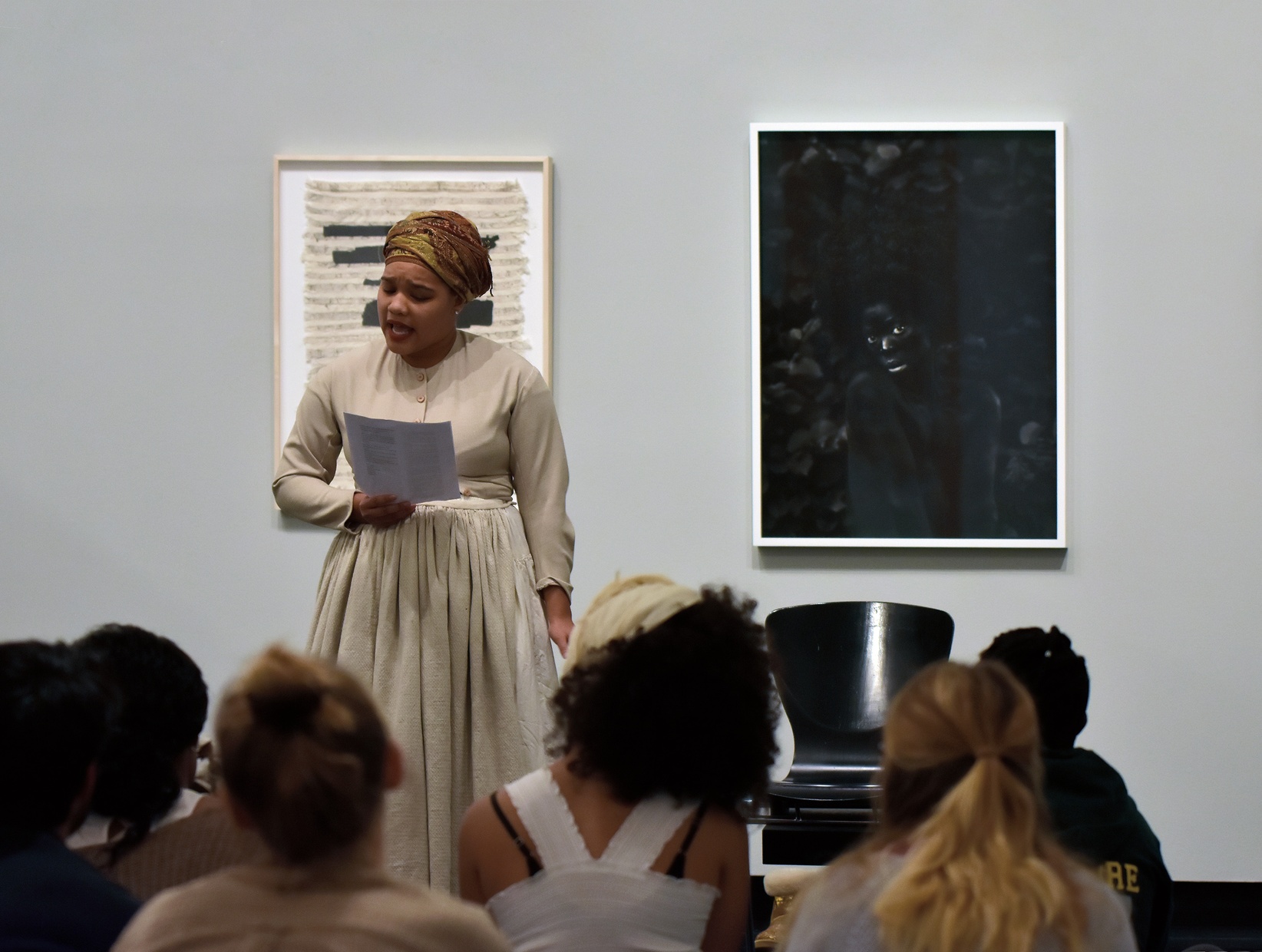 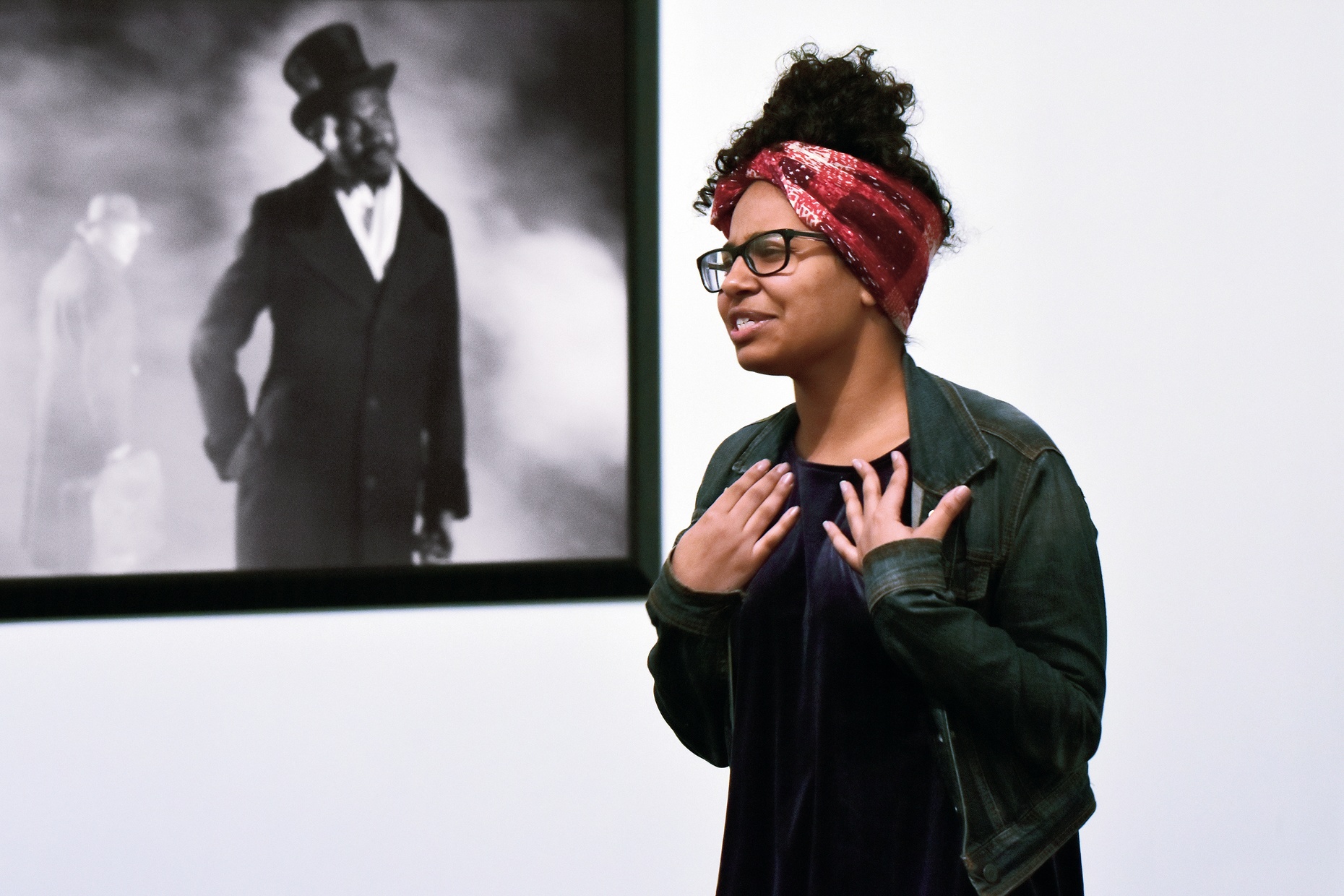 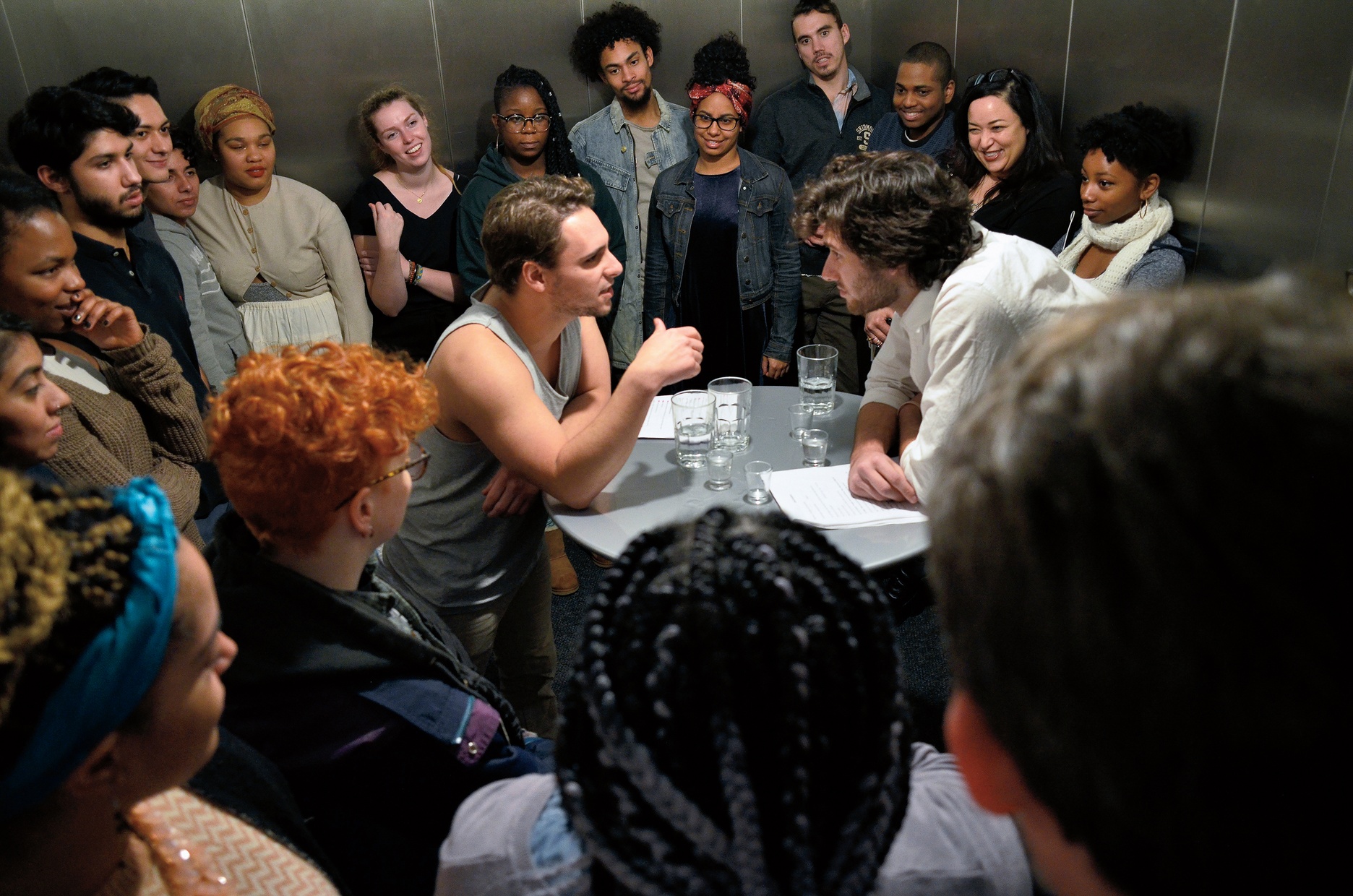 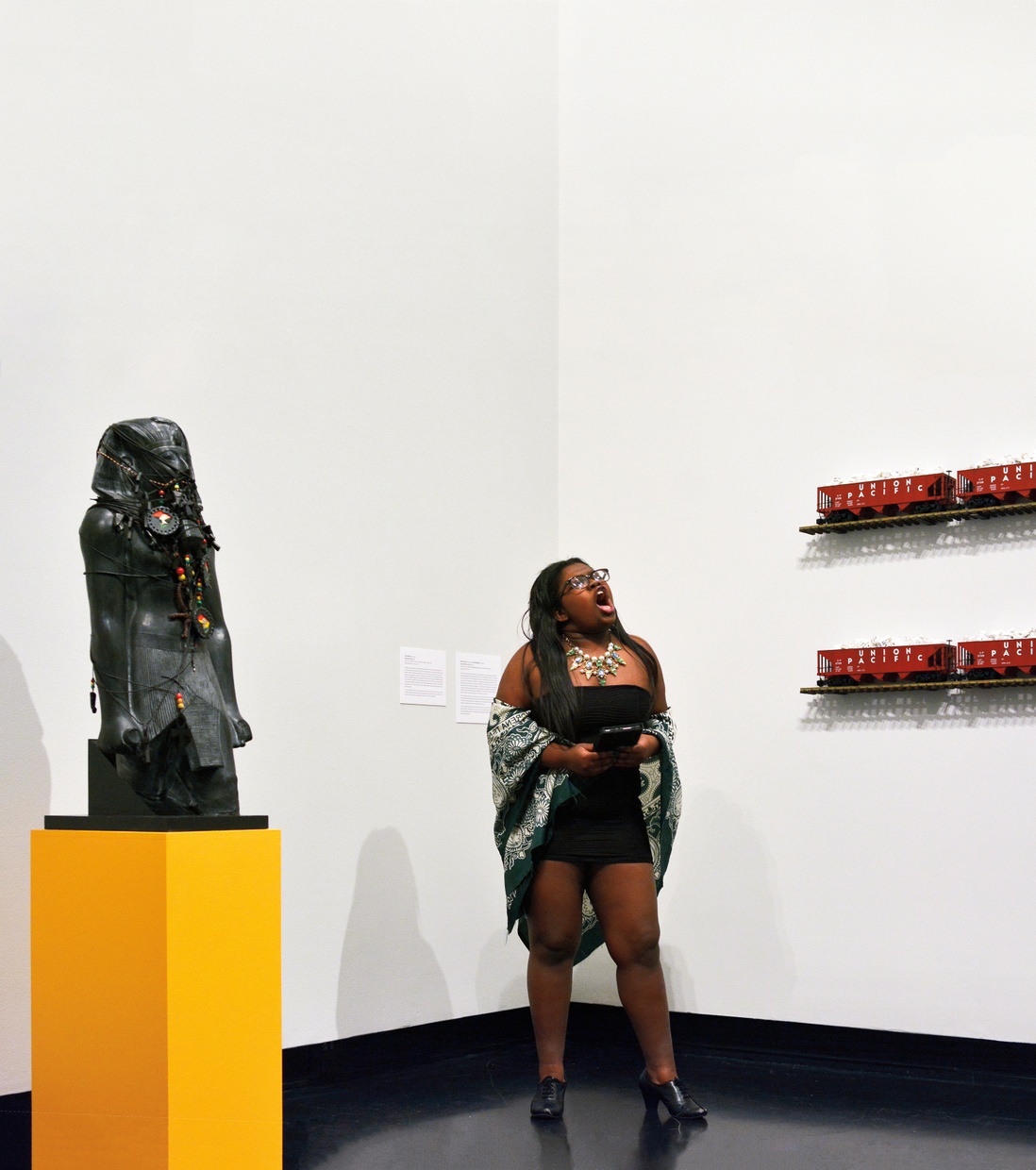 On December 12, 2017, students in Assistant Professor of Directing, History, and Theory Eunice S. Ferreira’s Black Theater course presented “Black Theater Poppin’ at the Tang,” an evening of performances in the museum. Students created original works and staged interpretations of plays in conversation with artworks on view. Performers invited the audience to follow them as they moved through various galleries.

The Tang elevator doors open to a crowded bar scene.
An interracial couple is arrested in the gallery.
A DJ spins records and schools the crowd on the history of hip hop.
Chessboard pieces come to life in an improvised dance.

Each time I teach the course Black Theater, the students and I build a unique and dynamic learning community. In fall 2017, seventeen students from different majors took intellectual, personal, and artistic risks—the highlight of which was “Black Theater Poppin’ at the Tang,” their final creative project and the course’s culminating experience. Although Black Theater is not a performance course, I employ “performance as research” strategies in and outside of the classroom. The course focuses on theater history, theory, and dramatic literature and embraces intersections with sociology and other fields related to black studies. During the semester, students discuss and analyze the centrality of image in the creation, function, and reception of plays by African American playwrights.

The Tang enriched our exploration of these ideas with three exhibitions that prominently featured the work of artists of the African diaspora: If I Had Possession Over Judgement Day: Collections of Claude Simard; Opener 30: Njideka Akunyili Crosby—Predecessors; Tel_; and Other Side: Art, Object, Self. A semester-long collaboration with the Tang challenged students to consider not only what they were looking at but also how their own looking may have changed since the beginning of the course. Students critically examined their relationships to art and how art related to their own intersectional identities. After two sessions at the Tang, students wrote reflection essays, posted responses to social media as part of the museum’s #tangcollectivecatalog initiative, and imagined performative responses to the exhibitions.

In the Tang’s exhibitions, students recognized tropes from early African American plays and discovered ways in which different artworks evoked transnational black identities. They analyzed how museum spaces “frame” racial representation. How do the qualities often attributed to museums contribute to the framing of works by or about black lives? What matters?

In redesigning my syllabus to collaborate with the Tang, I remembered my own undergraduate experience of going to an art museum for the first time when a professor required that we visit Boston’s Museum of Fine Arts. The assignment granted me permission to enter a space I previously considered irrelevant or inaccessible. The white neoclassical building sits like an Olympian temple on Huntington Avenue. I felt literally and figuratively small as I entered its historic foyer and moved through the antiquities wing to halls of European paintings. My friend and I posed for photographs, making interventions with sculptures, paintings, and other objects. I like to imagine that what we were doing was not merely playful engagement, but that, as women of color, we understood that we needed to point the camera toward our culturally marginalized bodies in order to create our own visual narratives.

The students in Black Theater were invited to reflect on their own museum experiences. They identified economic, class, and cultural factors that positively or negatively impacted their relationship with art museums. As a scholar-artist, I wanted to challenge the students to transform their personal responses into critical interventions. How can we move beyond the customary object-spectator model of museum viewing to a more dynamic exchange of object and spect-actor? I borrow the term “spect-actor” from Augusto Boal (1931–2009), visionary Brazilian theater artist, political activist, and founder of Theatre of the Oppressed, an international movement that promotes theater as a tool for social change. Boal believed that audiences should not be passive observers but active participants in drama in order to be equipped and compelled to act in “real life.” Can we thus become museum spect-actors? During our visits to the Tang, students selected artworks on view and brainstormed how they might use other forms—poetry, film, music, dance, drama—to imagine a performative response. 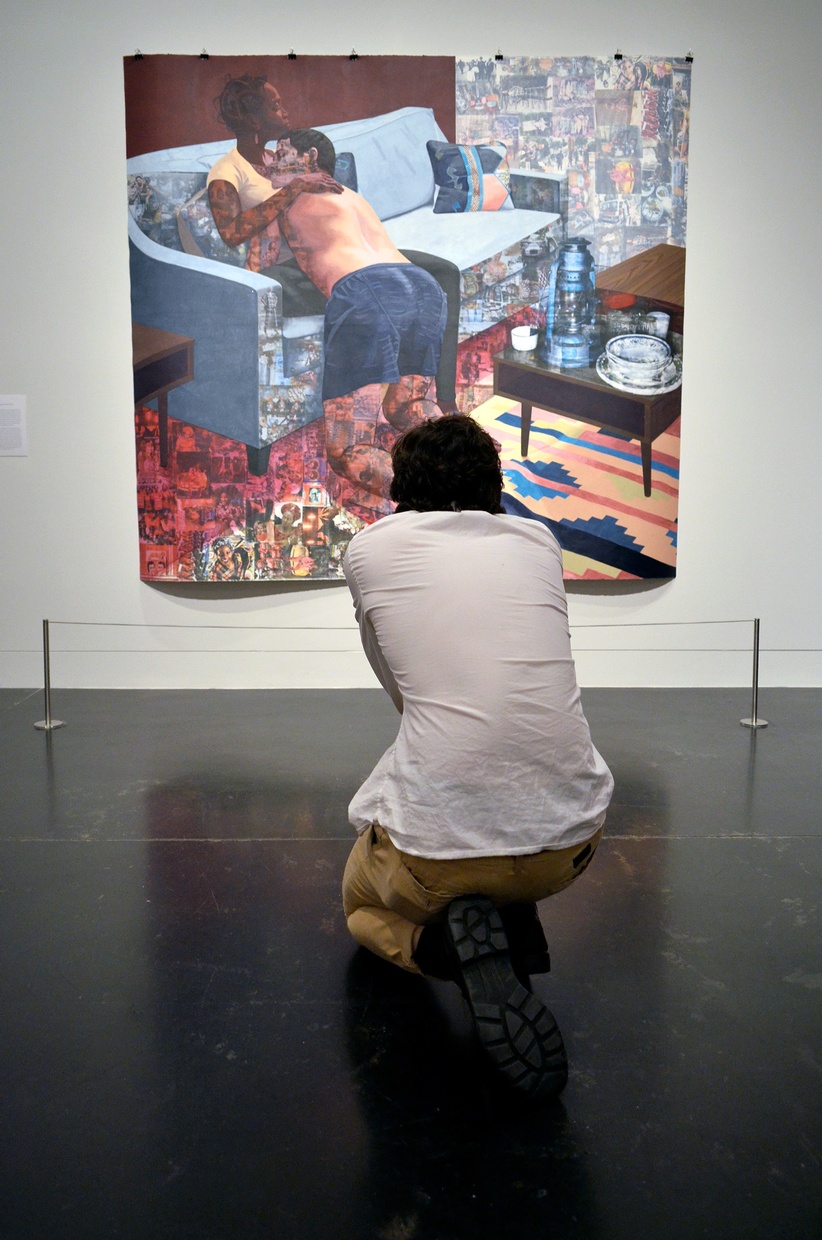 Celeste Muñoz Perez ’19, dance major and computer science minor, designed a participatory dance workshop inspired by Willie Cole’s To get to the other side (2001), a massive chessboard with lawn jockeys as chess pieces. Cole’s sculpture ignited discussions on transnational black identities, the contested significance of lawn jockeys, Yoruban spirituality, and the artist’s act of reclaiming and repurposing objects. Muñoz Perez wanted to create a dance piece, and when faced with the challenge of analyzing Cole’s work, she turned to her other training: “In my computer science classes, we take simple statements or procedures and dissect them to find ways in which we can make code to result in the same outcome—something that is visible and straightforward to the eye but readable and explicit to those who dig in deeper. In a way, I thought of [Cole’s sculpture] like code. In order to fully understand it, I needed to dig deeper.” Pawns, considered the weakest pieces, are placed on the front line of battle. Just as Cole elevated servile lawn jockeys by reinterpreting them as Yoruban deities, Muñoz Perez wanted to empower the oft-sacrificed pawn. In her dance “No Way Out,” the chessboard was a world in which a game of power is infinitely repeated with no clear victor and no way to exit the game.

Maryam DeWitt ’18, social work major and documentary filmmaker, wrote and performed “An Ode to You and the Apology,” an imagined poetic dialogue between John Ahearn’s Formal Portrait of Tracy (c. 1984) in If I Had Possession and Zanele Muholi’s self-portrait HeVi, Oslo (2016) in Other Side. DeWitt gave voice to Ahearn’s sculpture in a hundred-line poem, creating a fictional familial bond to Muholi’s self-portrait. In DeWitt’s imagination, the women were enslaved on a Southern plantation. Dressed in off-white shades of raw cotton, DeWitt stood in front of Muholi’s striking photograph and recited her poem in a Southern accent. As she described the character of mama, our gaze inevitably veered toward Muholi’s HeVi, Oslo:

Ziggy Schulting ’18 and Silas Shah ’20 presented a scene from Don’t Smoke in Bed (2016) by Aurin Squire, a play about an interracial couple who embarks on a series of bedroom interviews, in the exhibition Tel_ by Kamau Amu Patton. Schulting, a theater and English double major, related her experience of performing in that space to our study of black theater: “This ever-changing community space seemed the perfect place to contemplate and study these serious issues of race in our contemporary society. Since it is impossible to look at current-day race relations without the consideration of our country’s history, it seems perfectly fitting that we performed in a space that is all about the layers of history.”

Bree Hassell ’18, social work major and aspiring screenwriter, adapted her original screenplay The Colors of Astronomy as a site-specific theater piece. Hassell tells the story of a young interracial couple in 1950s Louisville, Kentucky, “who find out the true meaning of the universe keeping them together.” In her museum-as-theater adaptation, Hassell ushered us to five different locations—from the atrium to the bookstore to the elevator to the mezzanine and ending in the Predecessors exhibition on the second floor. In the final scene, the young African American wife was ripped away from her white husband and taken to jail. In a poignant tableau, Hassell directed the husband to kneel in front of Akunyili Crosby’s Ike ya (2016). The large painting depicts the Nigerian artist seated on a couch while her white husband kneels at her feet, his head nestled on her chest. Audience members gasped as they took in the multilayered effect of Hassell’s inventive staging.

Prior to coming to Skidmore, I had not integrated teaching with a museum in my course designs. Teaching with the collection and exhibitions enhances the hybridity of my pedagogy as I continue to invite students to integrate the personal and political as engaged citizen artists and scholars.

Originally published in Accelerate: Access & Inclusion at The Tang Teaching Museum 2 (2018)
About Eunice S. Ferreira
Eunice S. Ferreira, Assistant Professor of Directing, History, and Theory at Skidmore College, is a scholar-artist whose research and artistic practice focus on the intersections of theatrical performance with issues of language, race, class, gender, culture, and national identity. She has published articles in English and Portuguese, including “Crioulo Shakespeareano & the Creolising of King Lear” in African Theatre 12: Shakespeare in & out of Africa.