South African artist William Kentridge’s 2012–2013 stop-motion animation Tango for Page Turning begins with a shot of an antique book. A hand enters into the frame and flips to the half-title page, which reads, A DICTIONARY OF APPLIED CHEMISTRY VOL. I. The hand turns to the title page and we see a cutout reading “PARTICULAR COLLISIONS” superimposed on the book’s title, already suggesting that the dance between viewer/reader and dictionary will be heavily mediated. The hand turns two more pages, but until the end of the work’s nearly three-minute running time, the pages—adorned with Kentridge’s charcoal drawings, paint, and text fragments—turn themselves, advancing so quickly that, like viewing a flip book, we see the illusion of movement.

A depiction of Dada Masilo, a South African dancer, choreographer, and one of Kentridge’s artistic collaborators, side steps onto and then off of the left page. Kentridge’s self-portrait enters onto the right page; he extends his hand to a figureless left page. A black horse trots along as text fragments flash across its body. Splotches and shapes, only occasionally representational in nature, appear on a page, then move, and ultimately disappear. Some sequences are repeated, some only appear once. All of these fragments might seem chaotic and dizzying if the piece wasn’t so elegantly choreographed and set to Philip Miller’s stuttering score, itself composed from fragments.(1) Despite its nonlinear structure, we might consider the work’s climax as the particular collision that takes place when Masilo and Kentridge dance onto opposite pages simultaneously and jump into each other, exploding into black splotches that at points reassemble into various parts of our horse. But that is only one of many collisions.

Kentridge points to “fragmentation and reassembly”(2) as a metaphor for how we can make sense of the world. It’s also a useful way to understand the artistic process of creating as well as the action in Tango. Early in the piece, fragmented text cutouts reading, UNDO, UNSAY, UNSAVE, UNREMEMBER, and UNHAPPEN dance atop the turning pages. While the video is not overtly political, it’s hard not to read it while thinking of colonialism and apartheid in South Africa, the focus of much of his other work. If we turn back the pages, can we remake the past and change the future? 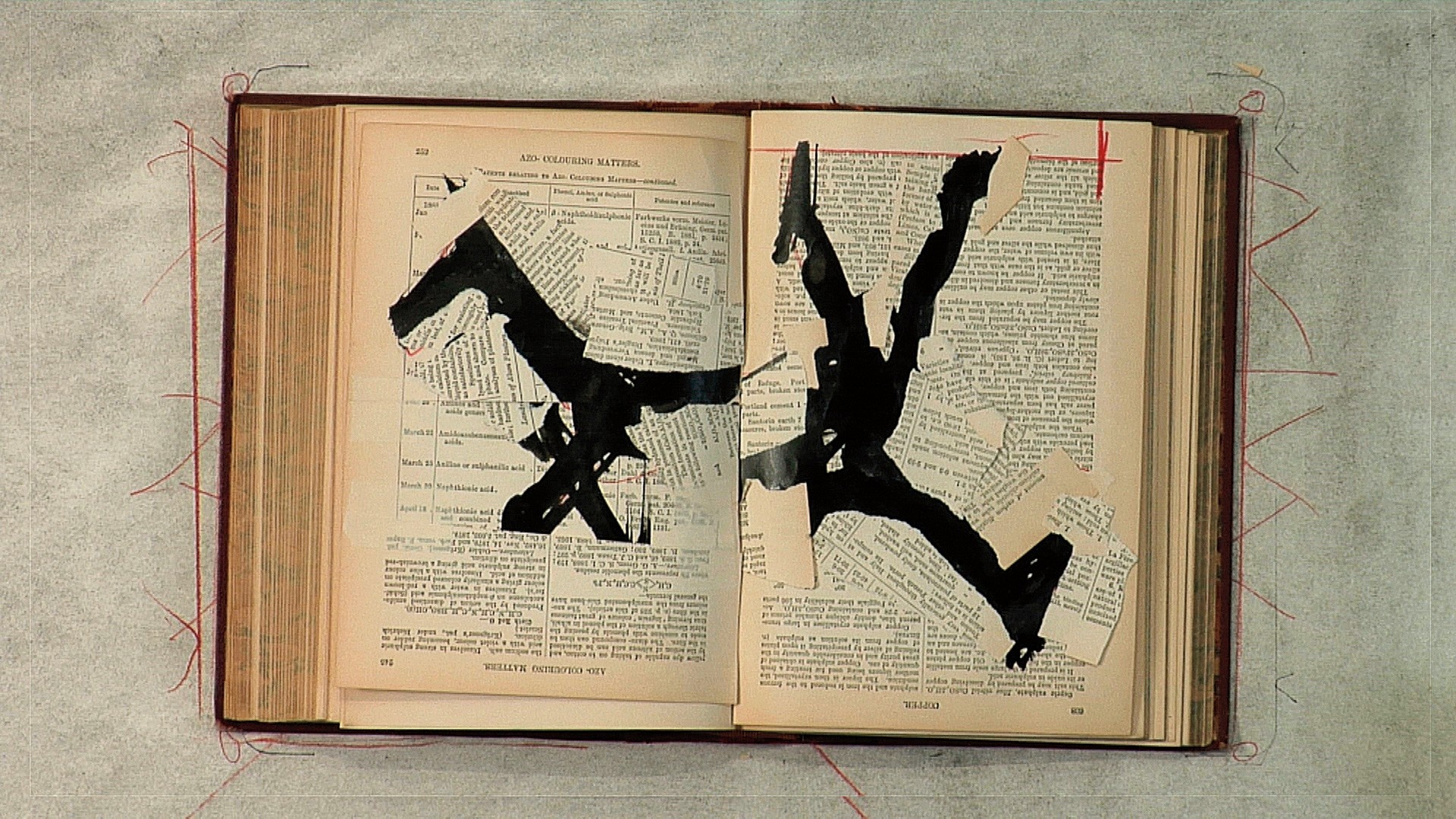 Tango for Page Turning is part of Kentridge’s larger multimedia chamber opera called Refuse the Hour (2012), inspired by conversations with American physicist and science historian Peter Galison about the technology of time keeping, Einstein’s theory of special relativity, and string theory. As an animator, Kentridge is most famous for his technique of filming a succession of meticulously crafted charcoal drawings on a single sheet of paper, which makes visible erasure and change and highlights the passage of time. As figures move across the frames in his 9 Drawings for Projection (1989–2003), for example, their past  is ever-present. In Tango, however, he notably eschews this animation-as-palimpsest style.

By situating his animations on the pages of a book, Kentridge makes us aware that the past is always present, waiting to be re-experienced and repurposed. Although the video’s progression suggests all pages come from the same nineteenth-century Dictionary of Applied Chemistry, a closer examination reveals that Robert Burton’s 1621 The Anatomy of Melancholy and a Dutch dictionary also provide settings for his drawings and collage. Using pages from these historical texts, he further emphasizes the fragmented nature of how we might understand our past. But the literal framing device the book provides also suggests an ever-present future. We may not know what lies in store, but we’re constantly aware of the next page.

Originally published in Accelerate: Access & Inclusion at The Tang Teaching Museum 3 (2019)
About Tom Yoshikami
Tom Yoshikami is the Assistant Director for Engagement at the Tang Teaching Museum, where he collaborates with faculty and student groups, organizes programming, including the museum’s popular Upbeat on the Roof summer concert series, the Whole Grain: Experiments in Film and Video series, which he cofounded. Prior to joining the Tang, he curated films for the Madison Museum of Contemporary Art, the University of Wisconsin Cinematheque, the Wisconsin Film Festival, and the Tales for Planet Earth Environmental Film Festival. At UW-Madison, he taught classes and advised several student groups who ran a campus movie theater, curated and maintained five art gallery spaces, and organized a marquee lecture series. He completed his MA and PhD coursework in film studies at the University of Wisconsin at Madison, where his research focused on film culture and the history of art house film exhibition.