At first glance and from a distance, Yun-Fei Ji’s Bon Voyage (2002) looks like a traditional Song dynasty landscape painting. The canvas writhes with organic patterns: gray mists and clouds, rocks and meandering water, gnarled trees and lush vegetation, people and animals. But it doesn’t take long—two or three seconds by my count—before I begin to notice some unexpected surprises.

My eyes moved from the top down. The landscape is clearly the world of the Yangtze River, a favorite subject for so many Chinese painters. I saw a familiar scene and familiar brushstrokes, the intricate interplay between geology and biology, between the angular rockiness of the mountain and the spidery chaos of the trees and bushes. But immediately my eye was drawn to the gnarled shape of a crashed helicopter—painted shockingly, vibrantly blue—at the top of the mountain. Cars, seemingly abandoned, and painted with similarly offensive saturation, pile up on the mountainside.

Nearby are migrant villagers, carrying their possessions on their backs, bearing their burdens with quiet dignity as they walk up the mountainside and toward the ineffable gray mists in the horizon. In the center of the painting a massive water creature consumes a human being. Legs dangle out comically from its gaping mouth. A massive insect, larger than the helicopter, watches the migrant villagers with interest. 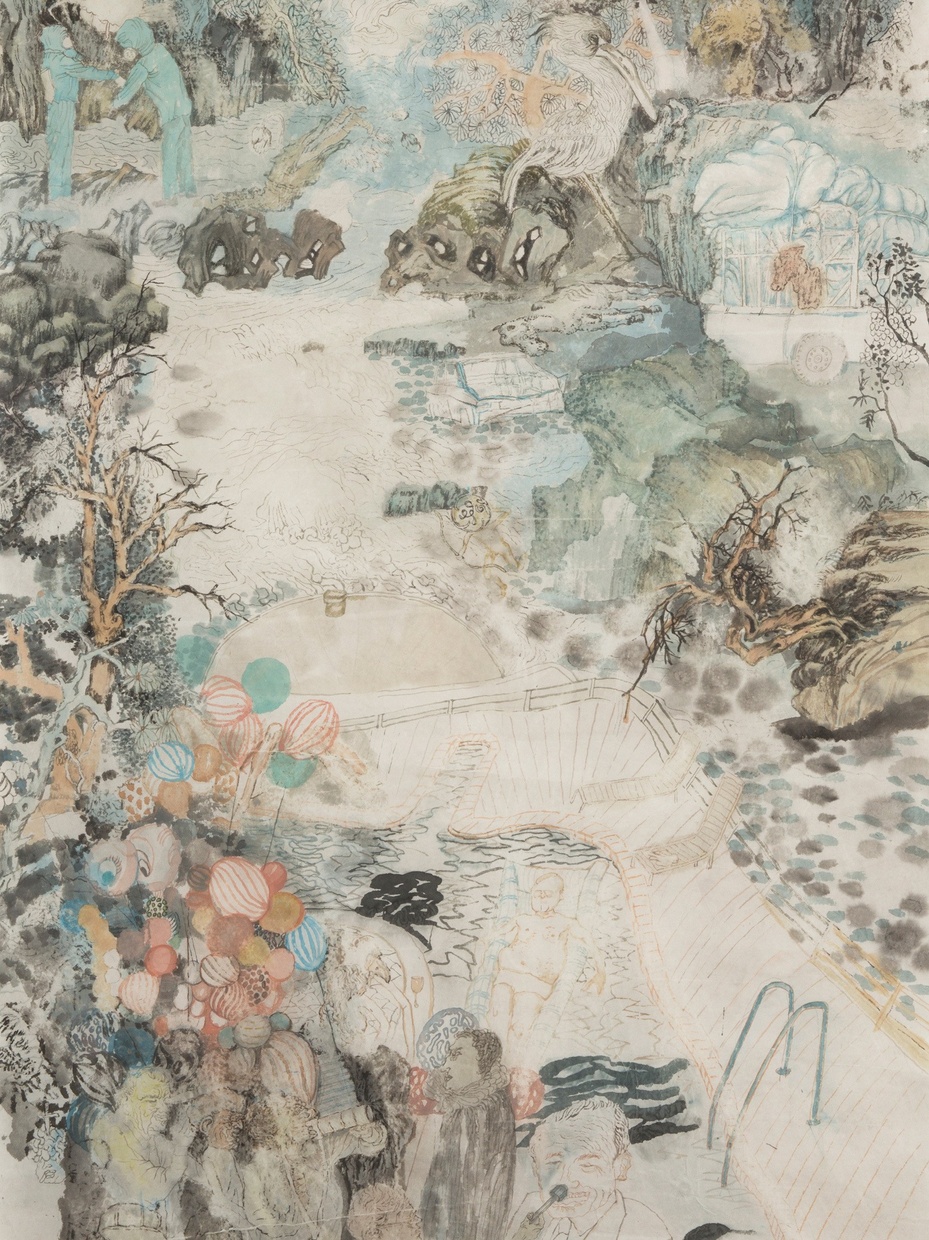 As the river cascades, downward we encounter men in hazmat suits, again in a vibrant neon blue. A giant bird stands over the body of a dead horse and gazes at another horse waiting dolefully in the back of a truck. The river is rushing now, foaming and chaotic, and a naked cherubic figure with an orb for a head draws an arrow to his bow. His orb-head carries the beautiful cursive “GE” of the General Electric company, one of the many contractors that supplied the Three Gorges Project Corporation.

At last we reach the bottom of the painting, landing us squarely on the deck of a boat on a pleasure cruise. A pot-bellied old man reclines in a pool. The scene is festive, with clusters of colorful balloons, a court jester, and a media personality interviewing a politician. Everyone is having a grand time, a bon voyage. The peasants retreating from their village, burdened with their only possessions, are having a very different sort of journey.

A final detail strikes me as the most subversive and interesting. In the lower-left corner of the painting, almost out of sight, is a cluster of rocks. Lodged in the stones is a single sword. Nobody seems to pay attention to it. I wonder whether there is a reference here to Arthurian legend, to an old story about land and water as key participants in political legitimation. The sword is still lodged in the stone; the land and the water are deafening in their silence. 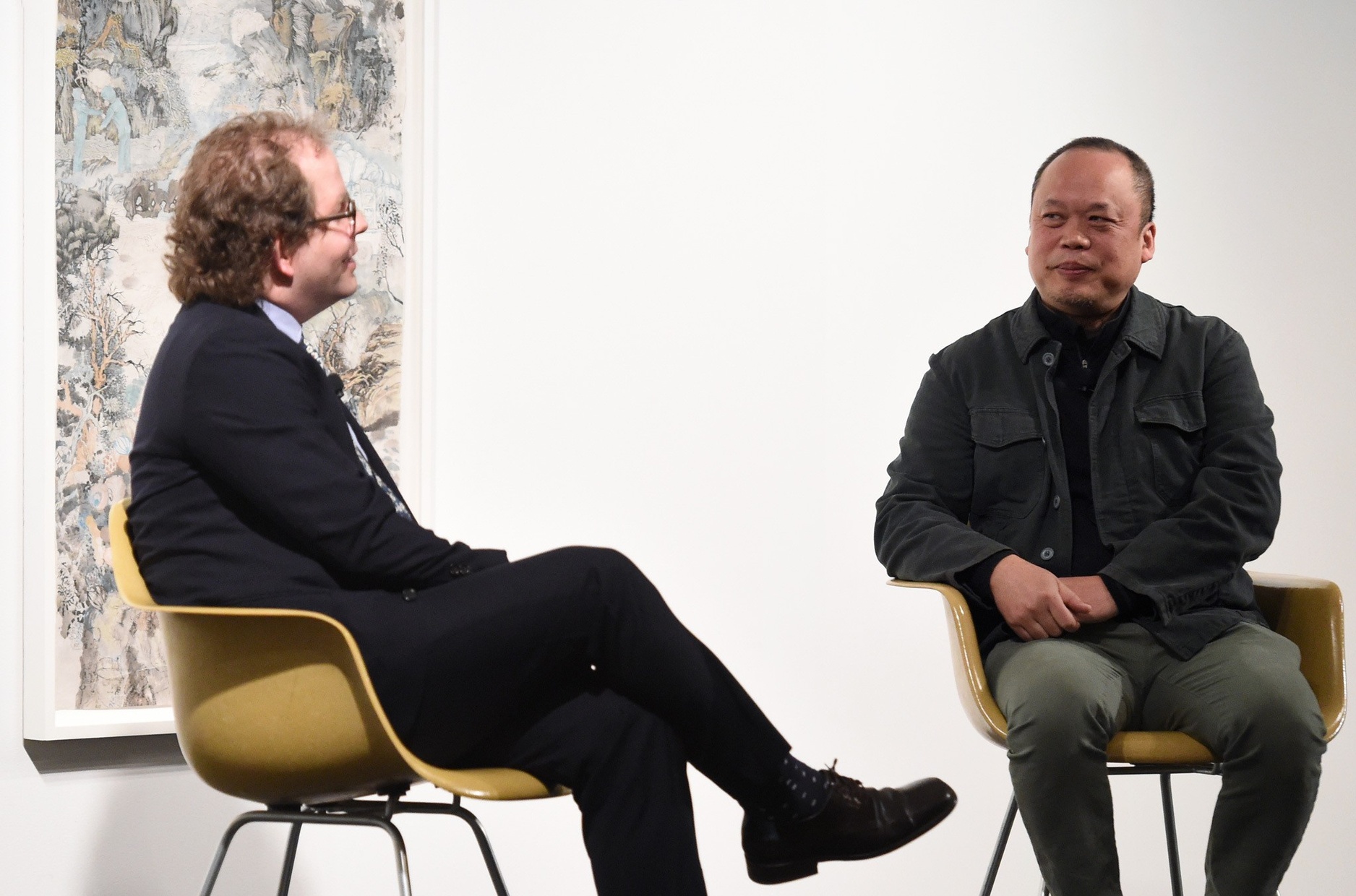 Born in Beijing in 1963, Yun-Fei Ji grew up during China’s Cultural Revolution (1966–1976). He graduated from the China Central Academy of Fine Arts in Beijing, and in 1986, he took a scholarship at the J. William Fulbright College of Arts and Sciences at the University of Arkansas. Ever since, he has worked as a critical figure in the contemporary art scene, addressing pressing issues in modern Chinese society: the environmental and human costs of rapid industrialization and the unseen lives of rural villagers, migrant workers, and those displaced by massive projects like the Three Gorges Dam.

Ji’s art is ecological—in Bon Voyage the viewer has a difficult time distinguishing between the different sorts of beings that form our collective world. Where do rocks end and plants begin? Where do trees end and birds begin? The painting plays with camouflage and transformation. At the same time, Bon Voyage uses vibrant, neon colors to show us what is shocking, offensive, and out of place: the helicopters, the cars, the balloons.

But what makes Ji’s art most like a traditional Song landscape is its use of the human figure. If you want to understand a painting, the great connoisseur Mi Fu (1051–1107) writes, you have to pay close attention to the human figures who inhabit that landscape. While we might be tempted to pay attention to the majestic mountains and gorges, the grand vistas afforded us by the painter, or the free-flowing brushstrokes that—as in the art of calligraphy—demonstrate the internal spontaneity and moral cultivation of the artist, for Mi Fu, true understanding of a painting comes with an appreciation of the human figures that occupy the landscape. In the words of art historian Richard Barnhart, “Figures in landscape can function as  a moral presence or reminder of values, revealing yet another facet of the painter’s mind and acting as a kind of code to the meaning of the landscape they occupy.”(1)

Ji’s paintings abound in interesting human figures. He often draws our attention to corrupt policemen and politicians, but more often he depicts the struggles of China’s peasantry—the people who bear the greatest burdens of rapid industrialization and environmental destruction. For his Three Gorges paintings, Ji traveled to the dam, bearing witness to the displacement of entire villages. His art embodies a shockingly simple, direct, and challenging ethical principle: to pay attention to the world is to offer a critique of it. If we are going to inhabit a world worth living in, we need to pay close attention. I’m grateful to Yun-Fei Ji for this ethic of seeing. He may be labeled a contemporary Chinese artist, but I see his work as continuous with a long tradition of Chinese literary and visual arts that speak to their contemporary circumstances, that delight us with surprising twists, and that offer searing critiques of powerful people and powerful ideologies.

Originally published in Accelerate: Access & Inclusion at The Tang Teaching Museum 3 (2019)
About Ryan Richard Overbey
Ryan Richard Overbey studies the intellectual and ritual history of Buddhism, with particular focus on early medieval Buddhist spells and ritual manuals. He received an AB in classics & Sanskrit and religious studies from Brown University and a PhD in the study of religion from Harvard University. He currently serves as the Robert H. N. Ho Family Foundation Assistant Professor in Buddhist Studies at Skidmore College.