Collection Explore
Essay
From Barrier to Bridge
by Rachel Cantave 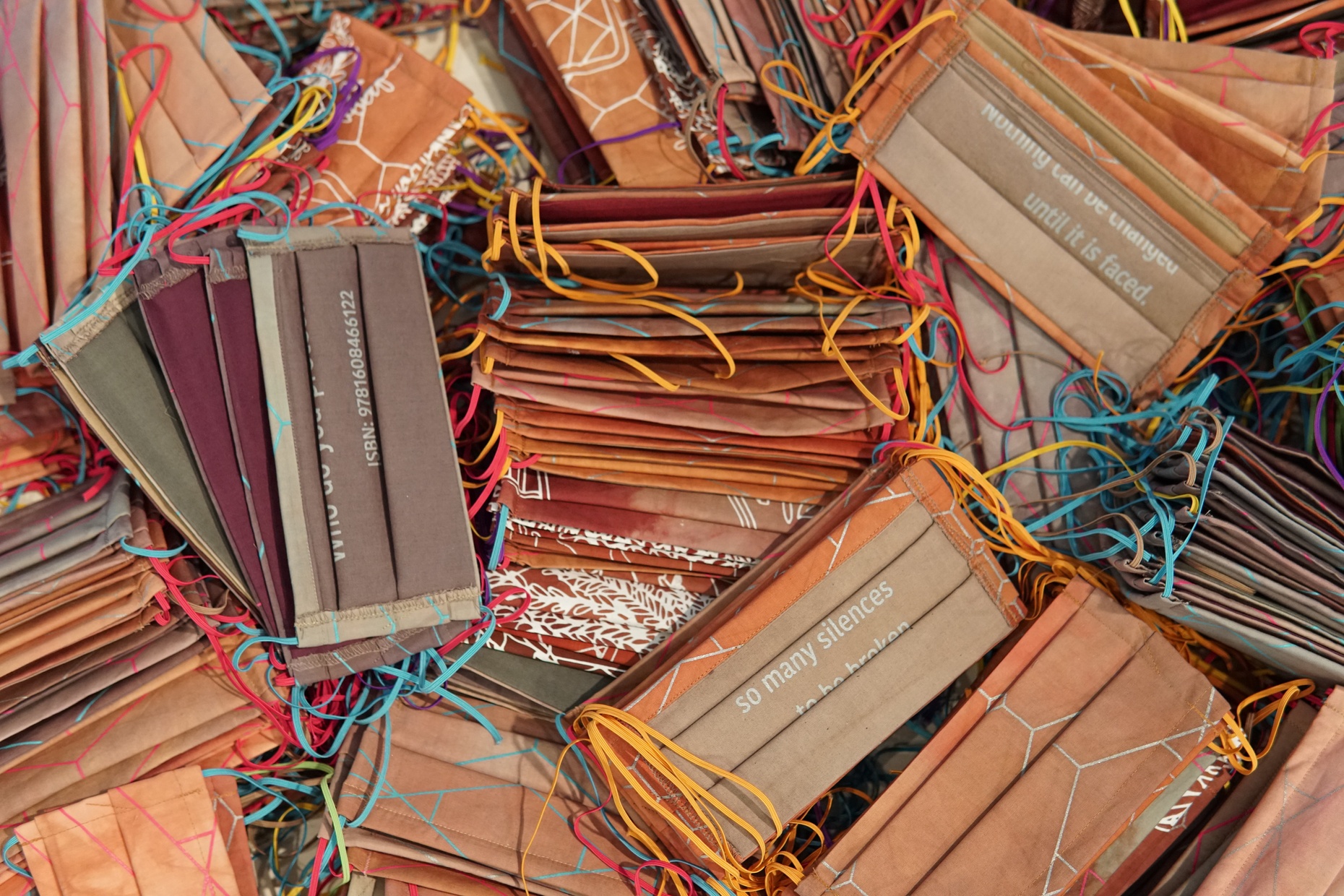 Political statements printed onto life or death technologies: what better symbol is there for the times in which we live? That was my first thought when viewing the collaboration between Nicole Cherubini and MASKS4PEOPLE.

As an anthropologist, trained to pay attention to symbols, I wondered how these particular masks work and what they communicate. I used to think of masks primarily through their association with religious rituals, funerary rites, and festive ceremonies like the vibrant costumes of a Caribbean carnival. Now, masks seem like a daily reminder of the quotidian and existential precarity of modern life. In other words, masks are protective and rather depressing. However, how does the mask transform when it features the writing of our most compelling activists, scholars, and artists? Can the protective barrier become a bridge?

I am intrigued by the placement of the quotes on the inside rather than on the outside of the masks. It conveys more of a personal affirmation rather than a public declaration—an important distinction given the salience of political pronouncements in our public and digital communities (#Blackout, #BLM, #SayHerName, #NoJusticeNoPeace). Placing the quotations over the mouth seems to be a reiteration of the conviction that the personal is political for MASKS4PEOPLE—but which people?

The implications of which people in our current society, where some have more access to technologies of life while others maintain an intimacy with death, gives MASKS4PEOPLE a more nuanced and grimmer context. My own Caribbean community is all too familiar with death and disease. From plantation slavery to ICE deportations, from cholera to COVID-19 transnational racial capitalism has terrorized the African diaspora for centuries. Yet when protestors enter the streets and lay their bodies down in traffic to demand justice, a mask can remind them, as Jamaican-American artist Renee Cox said, “I refuse to be put down, squashed, or made invisible.”(1) And as some prepare their emotional armor to return to hostile environments, be it the US Capitol or the college classroom, poet-activist Audre Lorde (the daughter of Caribbean immigrants) calls out from their mask:

And there are so many silences to be broken.

So as both racialized violence and a racialized pandemic continue, these masks have emerged, for me, as a connection point between Black communities of the United States and the Caribbean. It is where race and public health intersect. Where activism and survival meet. Where a protective barrier forms a bridge.

About Rachel Cantave
Rachel Cantave is an anthropologist and Assistant Professor of International Affairs at Skidmore College. She is also co-producer of the documentary film Chèche Lavi (Looking for Life).

Nicole Cherubini and MASKS4PEOPLE on Experimentation and Community Building
Interview

The Movement Unmasked by Lisa Grady-Willis
Essay
i
Pattern by Abby Fuess ’18
Inspired by the exhibition Other Side: Art, Object, Self
The Tang Pattern Project celebrates the Museum’s 20th anniversary. Organized by Head of Design Jean Tschanz-Egger, past and current Tang Design Interns created patterns inspired by the Museum’s exhibition and event history.
See all patterns