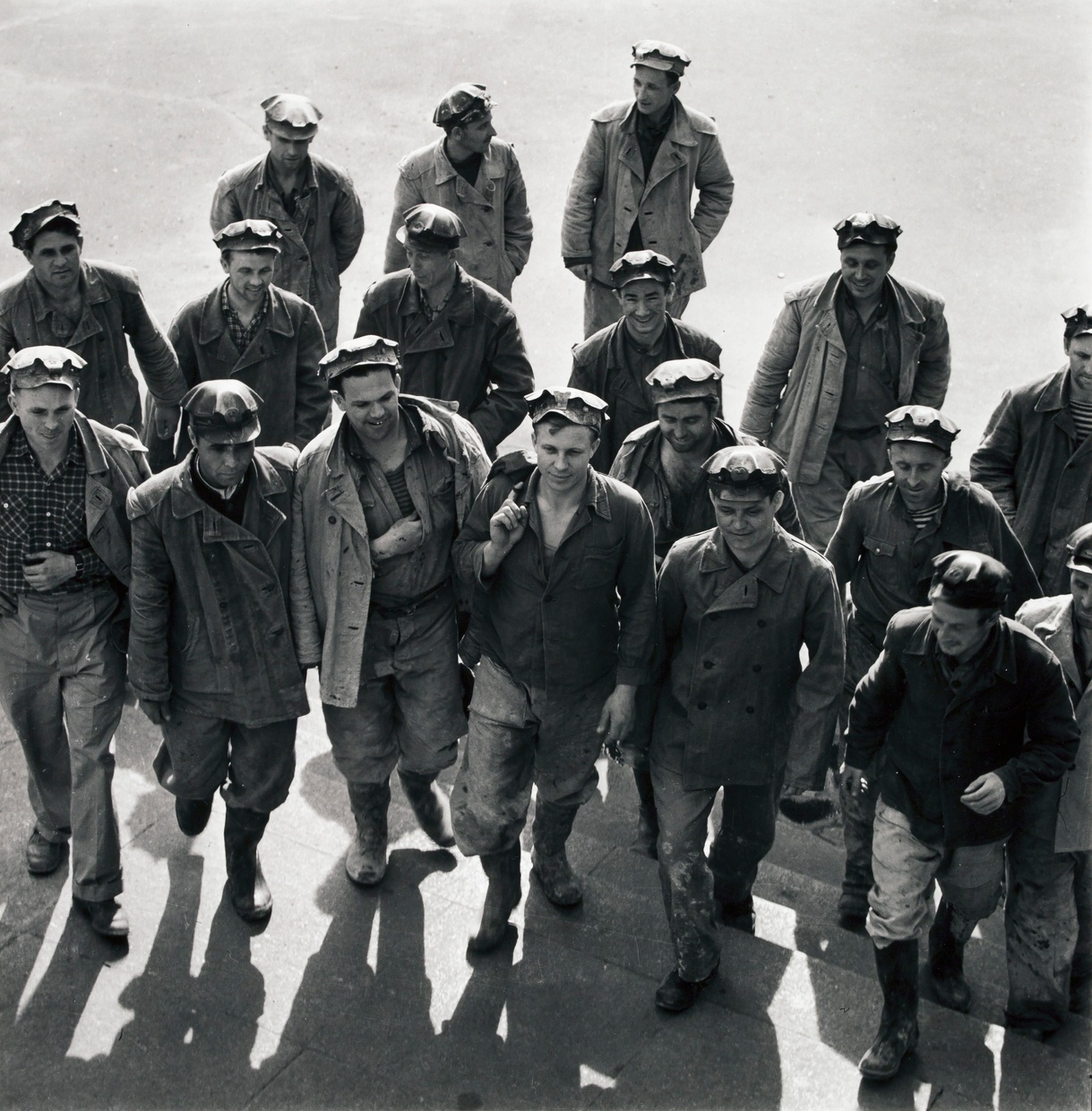 “Mother Russia’s Daughters and Sons: Gender in Russian History and Politics” with Professor of Political Science and Director of the Gender Studies Program Kate Graney

Students in this first-year seminar spent the semester examining how both famous Russians (such as Catherine the Great and Vladimir Putin) and normal Russian citizens are shaped by understandings of femininity and masculinity, and by other important historical forces, such as ideology and great power rivalry. The class paid special attention to the influence of both spiritual and visual culture on the development of Russian political history and gender norms, and in addition to their visit to the Tang Museum, took a field trip to the Museum of Russian Icons in Clinton, Massachusetts to deepen their understanding of how images of Mary, the Mother of God, have formed and continue to influence Russian culture and society.

Students researched photographs from the Tang collection that represent three important moments in Russia’s Soviet history: the 1930s, when avant-garde artistic ventures gave way to the political, economic and artistic imperatives of Stalin’s “Revolution from Above”; the 1940s, when Soviet Russia was attempting both to celebrate its great victory in the Second World War, and to reckon with its great losses; and the 1950s and 1960s, when the Soviets found themselves in a new Cold War with the United States. Students collaborated in pairs to enrich the Tang Museum’s collection catalog by producing extended label copy for each photograph, which we are happy to share with you below. 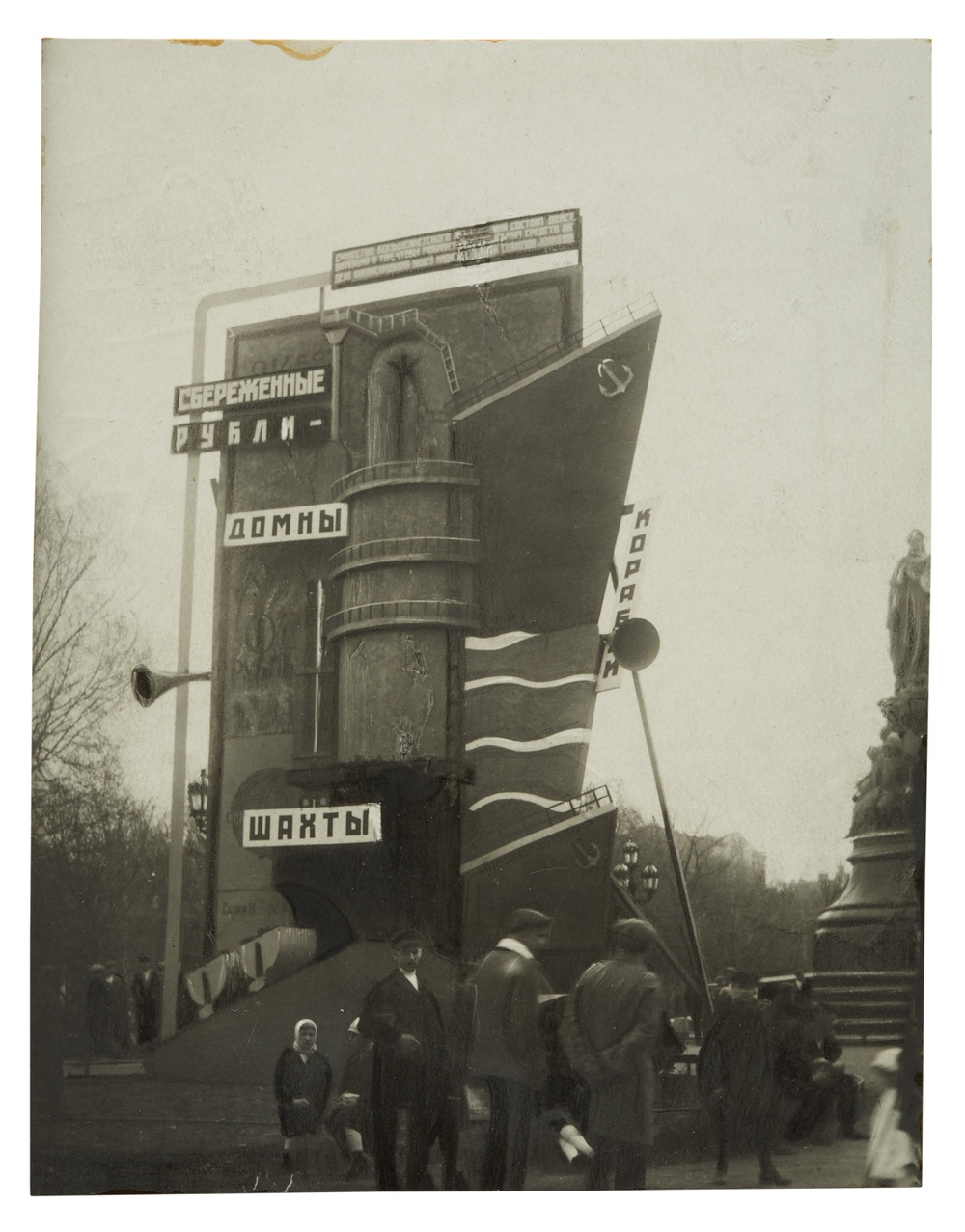 Unrecorded artist, title unknown, 1931, gelatin silver print, 4 ⅜ x 3 ⅜ inches, The Jack Shear Collection of Photography at the Tang Teaching Museum, 2015.1.60
Caroline Brown ’25 and Emma Weitzman ’25
During the early decades of the Soviet Era in Russia, there existed a vision for a “new society”, based on the idea of radical communalism and increased opportunities for all people, which influenced all aspects of society, including architecture. In this photo, we see a savings association for miners and sailors built according to the Constructivist architectural model, which employed unique asymmetrical tropes, as displayed here. The Soviet government urged Constructivist architects to design buildings to encourage “new Soviet people” to feel that they were part of a new, modern and prosperous society. Under Stalin’s new “industrialized” society, miners and other laborers had a particularly high status, and thus deserved innovative distinctive state institutions to serve them. The photo is a valuable example of the architectural style and social values that prevailed in the early 1930s in Soviet Russia. 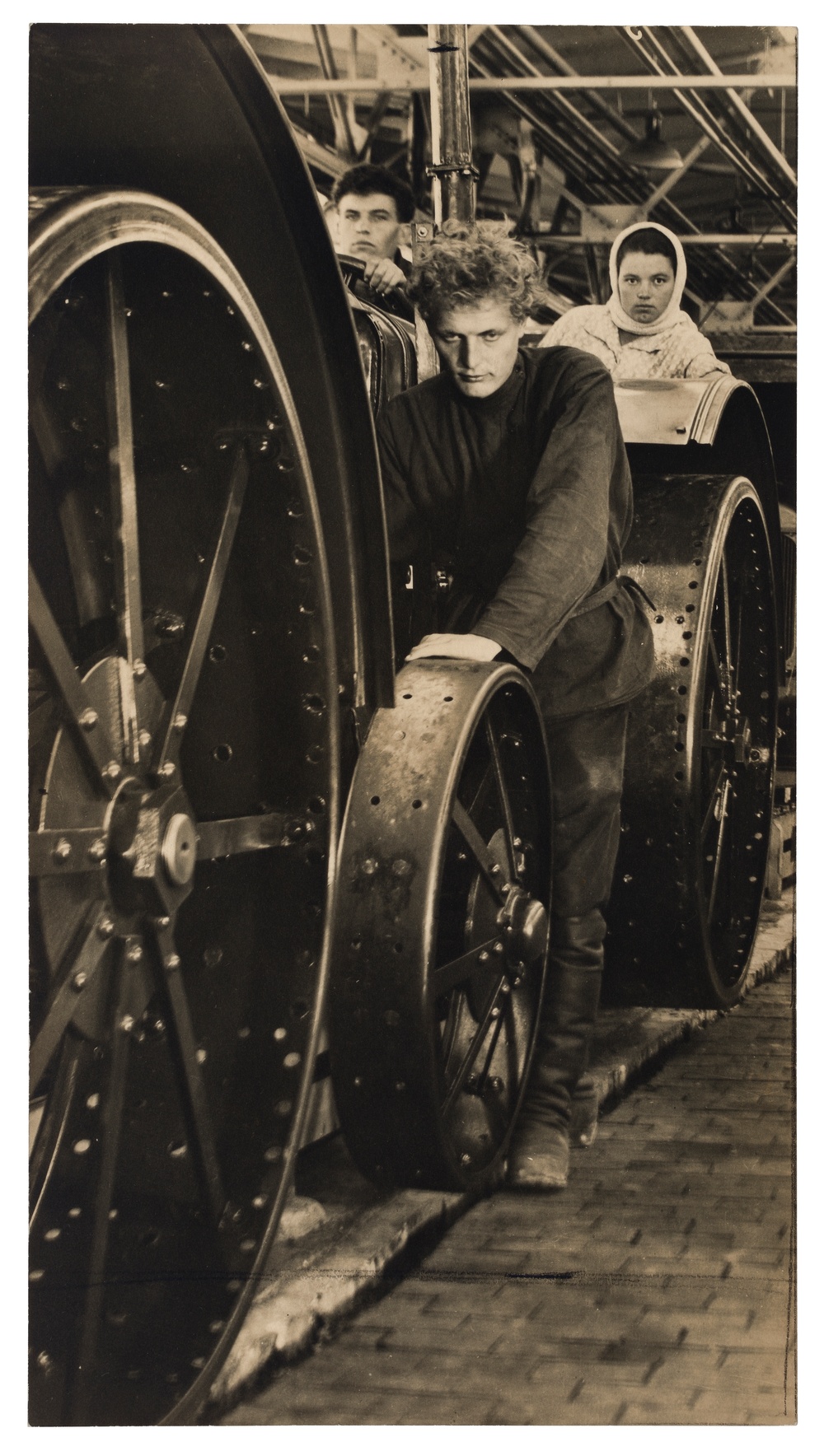 Margaret Bourke-White, The New Tractor, Tractorstroi, Russia, 1930, gelatin silver print, 11 x 6 inches, The Jack Shear Collection of Photography at the Tang Teaching Museum, 2018.38.165
Izzy Leonard ’25 and Emma Sellers ’25
Margaret Bourke-White was a professional American photographer whose work became famous in the US in the 1930s and 40s in publications such as Life magazine. This photo perfectly symbolizes Soviet Russia’s rapid industrialization process which took place under the leadership of Josef Stalin beginning in 1929. Russian leaders long knew they had to radically modernize the country’s industry and agriculture. But not until the rise of Josef Stalin did the national government possess both the will and means to do so rapidly and totally, if at brutal cost to the population. The woman depicted in the photo exemplifies the Stalinist-era’s call for “new Soviet women” to take up new trades and become active in the industrial labor force. They would do so in large numbers, despite the fact that Stalin’s industrialization drive never to provided women with leadership or advancement opportunities equal to those available to men. 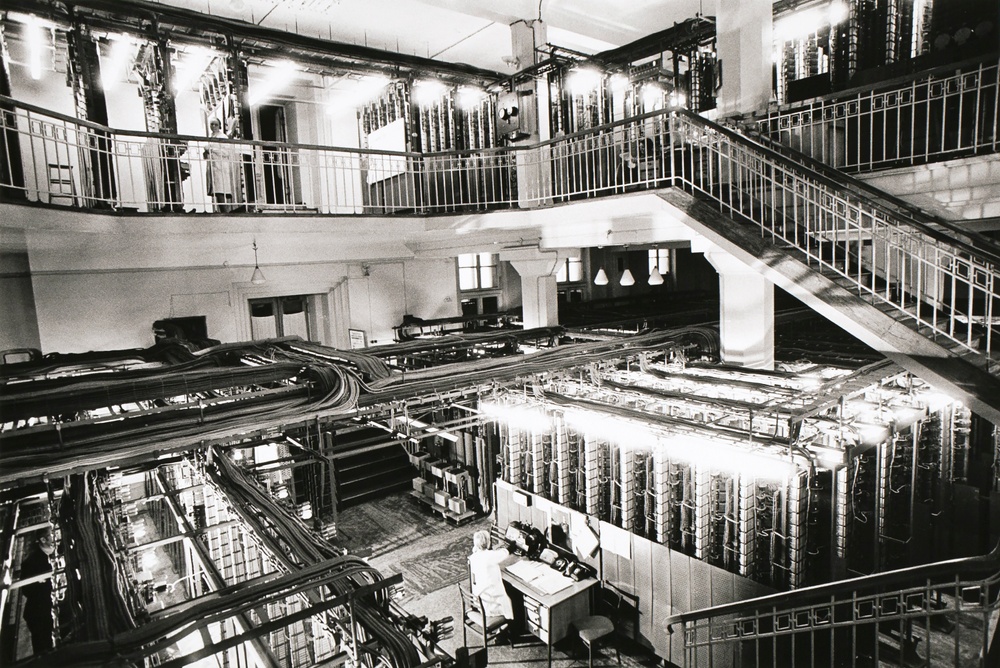 Dmitri Baltermants, Workers control the circuit room, n.d., printed in 2003, gelatin silver print, 16 x 19 ⅞, Tang Teaching Museum collection, gift of M. Robin Krasny in honor of Ilya Gronuist Sukman, 2020.29.44
Sydney Borak ’25 and Will Moyer Laurin ’25
This image displays a complex circuit room of unknown purpose; it is possibly a telephone exchange or massive computer mainframe. Three of the four workers portrayed in the image are women, and the central character of the picture is a woman busy at work in a lab coat. During the Soviet era, women made up a significant portion of technical engineers and scientists in Russia. The photo is likely from the late 1930s, the era of the establishment of the Soviet Creative Conference of Women Scientists. The photographer, Dmitri Baltermants, worked for numerous Soviet government-sponsored newspapers throughout the 1930s and WWII. His photography was used domestically by the Soviets to highlight the country’s status as a modern, technologically-advanced communist superpower, and was intended to be seen by both the Russian people and the rest of the world.
Read More
In reality much of the STEM community was still dominated by men even in progressive Soviet Russia, which had a formal public commitment to gender equality in all spheres. The image has been staged to convey a message of gender equality in the workplace. Women are clearly seen in positions of importance and power, and in fact, the only person not under the direct spotlight is the man in the bottom left corner. The photo is most likely a piece of propaganda used to demonstrate the Soviet Union’s technological advancements and progressive gender policies to foreign audiences. was intended to be seen by both the Russian people and the rest of the world.
Show Less 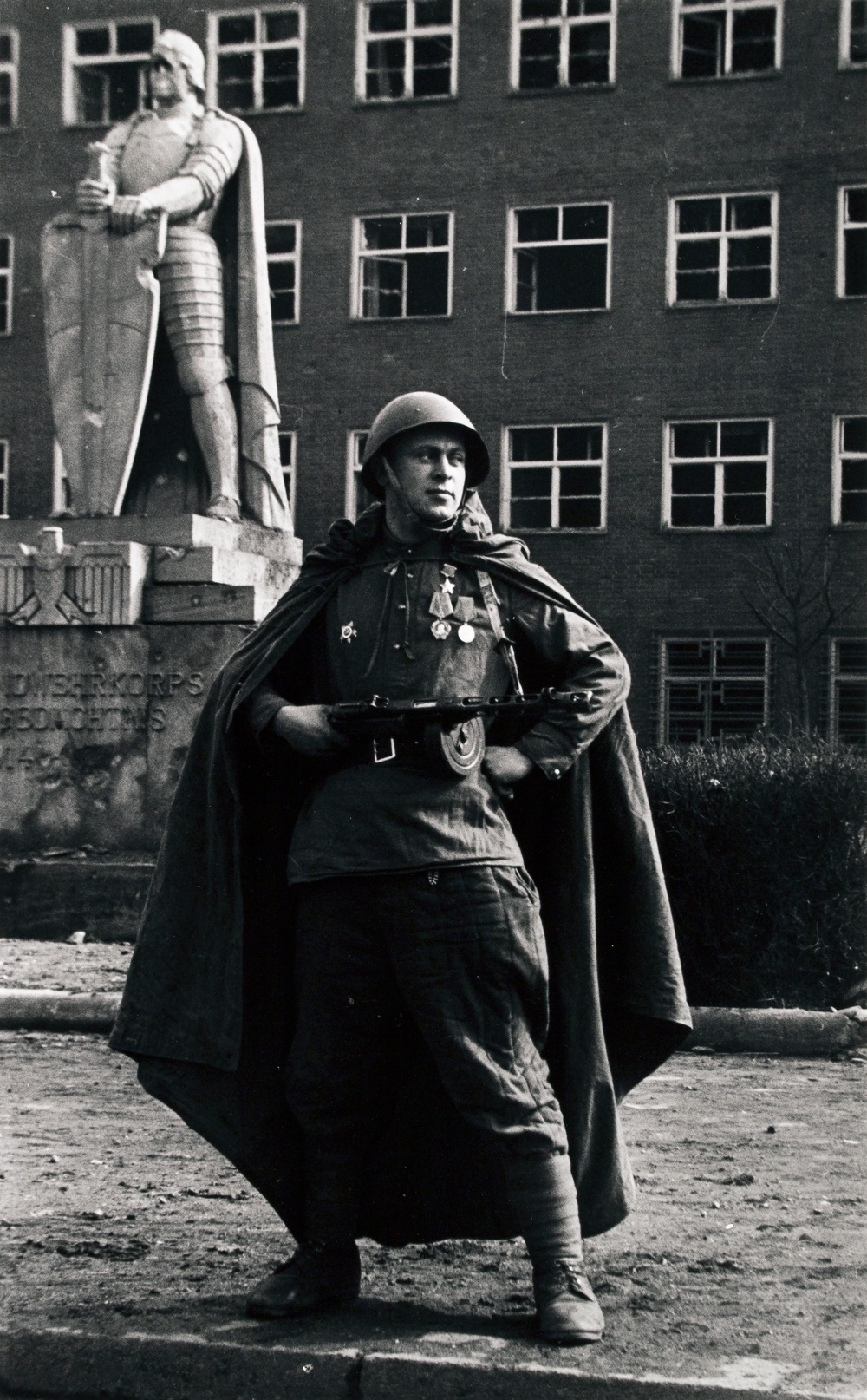 Dmitri Baltermants, The Victor (Soviet soldier mimicking Teutonic statue), 1945, printed in 2003, gelatin silver print, 14 x 11 inches, Tang Teaching Museum collection, gift of M. Robin Krasny in honor of Ilya Gronuist Sukman, 2020.29.39
Grace Grbach ’25 and Chanzlah Julien ’25
This photograph was taken in Berlin by Dmitri Baltermants, a Soviet photographer and self-proclaimed virtuoso of staged photography, shortly after Soviet Russia had emerged victorious in the Battle of Berlin. It conveys the theme of Soviet heroism, which is present in much of Baltermants’ work. The star-shaped medal worn by “The Victor” represents the heroism and bravery of those who served the Soviet state in the war and conveys the image of the Soviet Union as a strong, advanced, and, crucially, victorious country.
Read More
The man or “The Victor” depicted here is mocking the German Teutonic knight statue pictured in the background; this shows the disdainful Soviet attitude towards the Germans but also arguably creates an unrealistically strong image of Soviet Russia at the end of the war, masking the country’s severe internal problems after the war such as unfair treatment of women soldiers and crippling economic shortages. This image is truly the epitome of what Soviet Russia wanted to show the rest of the world in the wake of the Second World War, but also of how much they wanted to hide.
Show Less 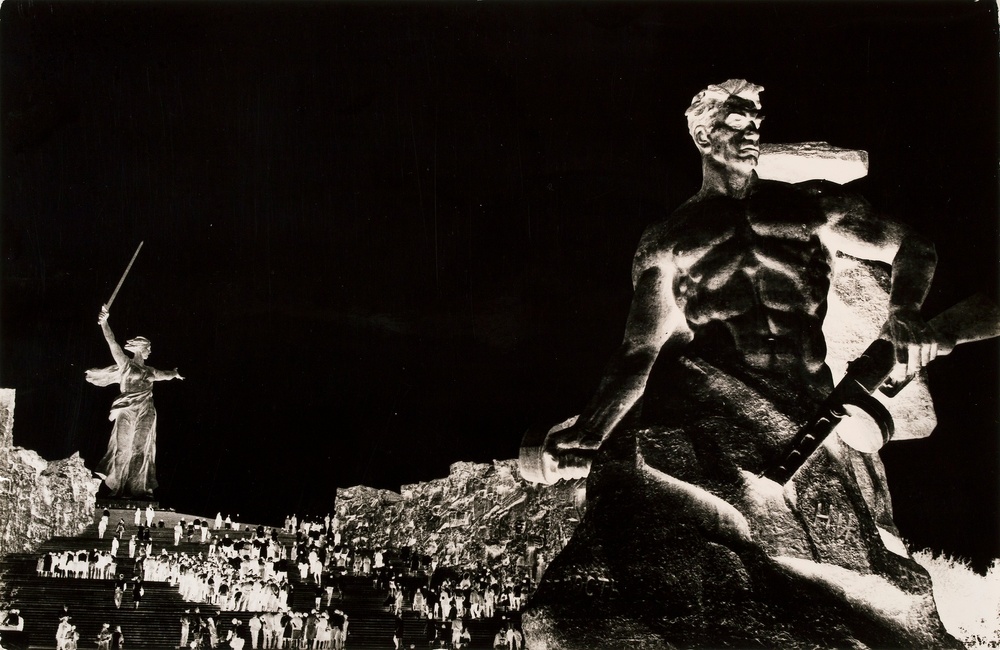 Dmitri Baltermants, Mamayev’s Memorial (Victory Memorial in Stalingrad), 1969, gelatin silver print, 7 ½ x 11 ½ inches, The Jack Shear Collection of Photography at the Tang Teaching Museum, 2020.31.216
Bridget Coyer ’25 and Molly Abramowitz ’25
Pictured here is a memorial to the famous World War Two Battle of Stalingrad called Mamayev Kurgan (The Motherland Calls), located in the Russian city of Volgograd (formerly Stalingrad). The foreground of the photo shows a man holding a gun; he represents the idealized, virtually superhuman, Russian worker and soldier. The female statue in the background is named Rodina-Mat and is the largest free-standing sculpture in the world. She tells the story of Soviet Russia’s pain and ultimate triumph in the Battle of Stalingrad. The many people seen gathered around her memorialize the thousands of Russian soldiers slain in the battle and buried beneath her.
Read More
Even today, many Russians take a pilgrimage to Mamayev Kurgan to remember those who died in the battle. This statue was created by Yevgeny Vuchetich whose works won many Soviet-era awards. This statue was his greatest and most notable sculpture. General Chuikov, who is buried at the memorial, says this about the Battle of Stalingrad: “We shall hold the city or die there.‘’ The photographer, Dmitri Baltermants, achieved international fame for his World War Two-era photographs and remained prominent both in the Soviet Union and outside it until his death in 1990.
Show Less 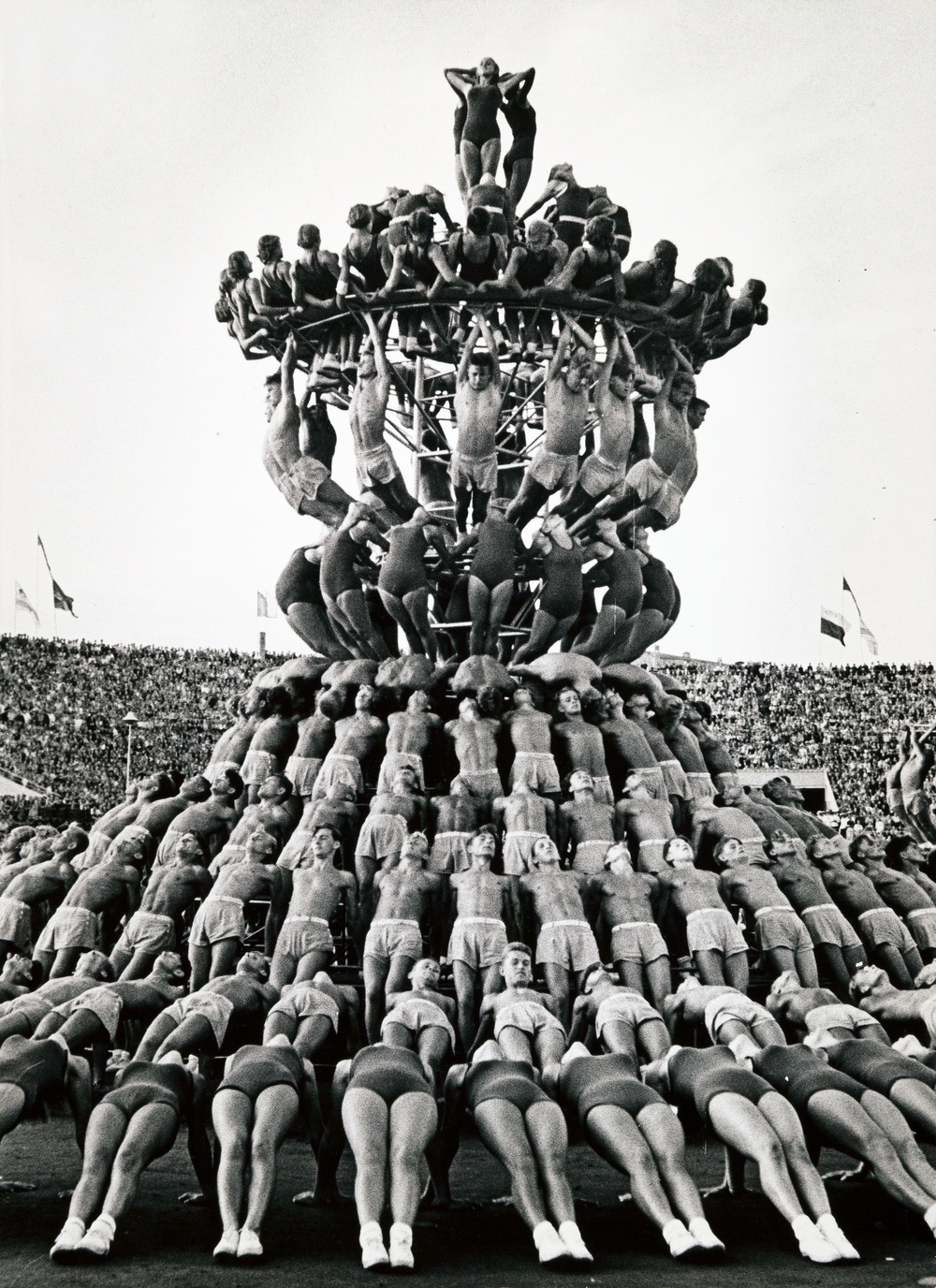 Lev Borodulin, Pyramid, Moscow, 1954, gelatin silver print, 15 ⅜ x 11 ¼ inches, The Jack Shear Collection of Photography at the Tang Teaching Museum, 2018.38.23
Jamie Bostrup ’25 and Riley Machanic ’25
This photo of Soviet athletes was taken by photographer Lev Borodulin in Moscow in 1954. The Human Pyramid form was meant to symbolize the collective strength, energy and fitness of the Soviet Union after World War 2. The USSR wanted to show the world that it had survived the war without compromising its citizens’ physical fitness or teamwork standards. The oiled bodies, posed in front of a massive crowd, portrayed the ideals of Soviet citizenry, especially regarding femininity and masculinity; uniformity and symmetry is highly valued, and men and women participate equally and are displayed on equal ground in this feat.
Read More
Lev Borodulin was a Soviet photographer whose career was interrupted while he served in WWII. Borodulin resumed his photography training at the Moscow Institute after the war, and during his career mainly focused on sports photography, especially the Olympic Games. Borodulin eventually earned international fame and recognition for his dynamic compositions, many of which appeared in the magazine Ogonyok, which had a status in Soviet Russia much like Life magazine had in the U.S. during the Cold War era.
Show Less
i
on-campus page views today: 0
off-campus page views today: 101
current wind in Saratoga Springs: 2.35 mph, S
Website design: Linked by Air