Tim Rollins and K.O.S.: A History

The Frances Young Tang Teaching Museum and Art Gallery at Skidmore College is organizing a major survey exhibition of the work of Tim Rollins and K.O.S. Tim Rollins and K.O.S.: A History examines the unique collaboration between Rollins, an artist, activist, and educator, and the Kids of Survival (K.O.S.), a group of artists originally made up of Rollins’s special education students from Intermediate School 52 in the South Bronx. The exhibition will present over twenty-five years of work collaboratively produced by Rollins and his students from the Bronx and from workshops conducted nationally and internationally. Based on literary texts, musical scores, and other printed matter, these works comprise one of the most celebrated and controversial art projects of the past quarter century.

Artist, activist, and teacher, Tim Rollins (b. 1955) began his career in 1980 as a co-founder of Group Material, a corps of young New York artists who pooled their money to rent a space in the East Village and mount critical exhibitions that addressed social themes and subjects like alienation, consumerism, fashion, music, and gender. Group Material organized exhibitions that sometimes involved collaborations with the local community and provided an early precursor for Rollins’s later work with K.O.S.

In August 1981, Tim Rollins, then twenty-six years old, was recruited by George Gallego, principal of Intermediate School 52 in the South Bronx, to develop a curriculum that incorporated art-making with reading and writing lessons for students who had been classified as academically or emotionally “at risk.” Rollins told his students on that first day, “Today we are going to make art, but we are also going to make history.”

When asked to elaborate on what he meant by “making history,” Rollins says, “To dare to make history when you are young, when you are a minority, when you are working, or non-working class, when you are voiceless in society takes courage. Where we came from, just surviving is ‘making history.’ So many others, in the same situations, have not survived, physically, psychologically, spiritually, or socially. We were making our own history, something that wasn’t given to us. We weren’t going to accept history as something given to us.”

Together, Rollins and his students developed a collaborative strategy that combined lessons in reading and writing with the production of works of art. In a process they call “jammin,” Rollins or one of the students reads aloud from the selected text while the other members draw and relate the stories to their own experiences. Their signature style was born as Rollins and K.O.S. began producing works of art on the pages of these books cut out and laid in a grid on canvas. Rollins and K.O.S. have produced paintings, prints, photographs, and sculpture based on literary texts such as Franz Kafka’s Amerika, Harriet Jacobs’s Incidents in the Life of a Slave Girl, William Shakespeare’s A Midsummer Night’s Dream, and musical scores, including The Creation by Franz Joseph Haydn. Initially they exhibited as “Tim Rollins and 15 kids from the South Bronx” or “Twenty Kids from the South Bronx with Tim Rollins;” in 1985, they adopted the name “Tim Rollins and Kids of Survival.

The collaboration between Rollins and his students soon outgrew the classroom. Frustrated with the strictures of the public school system, Rollins opened the Art and Knowledge Workshop, an after-school program in an abandoned school building five blocks from IS52. After teaching all day at IS52, Rollins would meet K.O.S. members at the workshop; homework would be done and art would be made. In 1987, Rollins and K.O.S. began using a traveling workshop format to spread the ideas and inspiration behind their project beyond the South Bronx. In 1994, Rollins and K.O.S. moved their operation to a studio in Chelsea. There Rollins and some long-term K.O.S. members rebuilt and expanded the project nationally and internationally, significantly increasing the number of workshops conducted with other schools and arts institutions. Today there are active K.O.S. members in Philadelphia, Memphis, San Francisco, Seattle, and New York. Although Rollins and K.O.S. continue to make new works, this project will focus on presenting their history, with a specific focus on the years 1984-1998.

In 1986, Rollins and K.O.S. had their first show at Jay Gorney Modern Art, who represented them until they moved to the Mary Boone Gallery in 1991.

Rollins and K.O.S.’s decision to exhibit the art that they had created in their classroom in professional galleries marked an important turning point in their history; it signaled the moment they began to distinguish themselves from other teacher-student collaborations and demanded that their work be engaged first as fine art. Between the mid-1980s and early-1990s, Rollins and K.O.S. participated in two Whitney Biennials (1985, 1991) Documenta (1987), the Venice Biennale (1988), the Carnegie International (1988) and had solo shows at the Walker Art Center, Minneapolis, Minnesota (1988); Institute of Contemporary Art, Boston (1988); Dia Art Foundation, New York, New York (1989); Wadsworth Athenaeum, Hartford, Connecticut (1990); Museum für Gegenwärtskunst Basel, Switzerland (1990); Museum of Contemporary Art, Los Angeles (1990); and the Hirshhorn Museum and Sculpture Garden, Washington, DC (1992).

“With Rollins’s guidance, these students are producing artwork of a remarkable sophistication, which refuses to conform to known categories but alternates between the literary and the visual, the modern and the naïve. Rollins’s teaching approach is at once classic and iconoclastic, for he uses significant works of literature as the basis for a visual statement. The result is a multilevel collaboration: among the students, between teacher and student, between the group and the authors whose books they choose.” (Roberta Smith, “A Collaboration, Tim Rollins and K.O.S.,” The New York Times, 21 November 1986.)

“Political without being propagandist, the work has a breadth that extends beyond its subtle commentaries on white/nonwhite cultural relations and seeks to dismantle the representations that support dominant myths.” (Jean Fisher, “Tim Rollins + Kids of Survival,” Artforum, January 1987.)

“The vitality of Rollins/K.O.S. art is traceable not only to its politico-esthetic successes, but to its authenticity. The exuberance of creative discovery is very close to the surface. This is a form of idealism, like the tabula rasa of Dada, Minimalism, Punk — an attempt to clean the slate with various kinds of violence against the status quo.” (Lucy R. Lippard, “Reading From Reality,” Lawrence Oliver Gallery)

Tim Rollins and K.O.S.: A History will be an in-depth look at the paintings, drawings, prints, and sculptures that comprise the most important series made by the group, including examples from:

Ignorance is Strength (after George Orwell’s 1984) • Inferno (after Dante Alighieri) • Frankenstein (after Mary Shelley) • Amerika (after Franz Kafka) • Alice in Wonderland (after Lewis Carroll) • The Scarlet Letter (after Nathaniel Hawthorne) • The Red Badge of Courage (after Stephen Crane) • The Whiteness of the Whale (after Herman Melville’s Moby Dick) • Animal Farm (after George Orwell) • The Holy Bible • Die Winterreise (after Franz Schubert) • The Temptation of Saint Antony (after Gustave Flaubert) • X-men (after Marvel Comics) • Oedipus Rex (after Sophocles) • Nation and Race (after Adolf Hitler) • The Birds (after Aristophanes) • The Clouds (after Aristophanes) • The Iliad (after Homer) • Prometheus Bound (after Aeschylus) • Invisible Man (after Ralph Ellison) • Adventures of Huckleberry Finn (after Mark Twain) • I See the Promised Land (after Martin Luther King, Jr.) • Incidents in the Life of a Slave Girl (after Harriet Jacobs) • A Midsummer Night’s Dream (after William Shakespeare) • Diary of a Young Girl (after Anne Frank) • The Creation (after Franz Joseph Haydn) • Harlem II (after Langston Hughes) • The War of the Worlds (after H.G. Wells) • I Have a Dream (after Martin Luther King, Jr.)

Tang Curator Ian Berry will serve as curator and editor of the project. The catalogue will be co-published with MIT Press and will include extensive new photographs of Rollins/K.O.S. work; exhaustive biographic information for Rollins and all K.O.S. members, and their first fully researched bibliography and exhibition history. Berry will provide a wide-ranging overview interview with Rollins, and a number of essays will be commissioned by writers such as art historian James Romaine, Julie Ault, Susan Cahan, David Deitcher, Eleanor Heartney, and Larry Rinder. A selection of writings by Martin Luther King—a key source for Rollins as he formed his early practice – will also be included.

Tim Rollins and K.O.S.: A History

This exhibition is organized by the Tang Museum’s Susan Rabinowitz Malloy ’45 Curator, Ian Berry.
twtweet this
fbshare on facebook 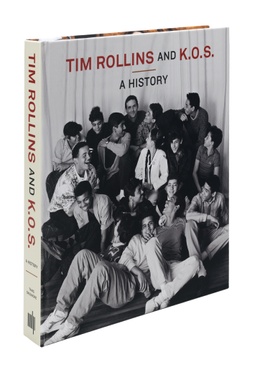