Designed for congregation, conversation, and study, Liz Collins — Energy Field is the first in a new Tang series that asks artists to imagine what a museum community space can be. Located on the Tang’s mezzanine, Energy Field is a long-running installation created as a lounge and social space for visitors and students. During the 2015-16 academic year, Energy Field has been the site of meetings, public dialogues, improvisational dance performances, sonic meditation, and more.

Energy Field is designed to revitalize the lounger/visitor through color, shape, and texture. It is a new age crystal cave viewed through a pop post-modern lens. With exploding supernovas on the ceiling, chevrons on the wall, and stripes on the floor, the brash sharpness is offset by plush carpeting, raining yarn, and upholstered furniture. Energy Field is a liminal space intended to invite both prolonged exploration and rest. A mirrored wall extends the room into the next dimension while at the same time functioning as a grounding device, i.e., “I am here now. Here I am.”

Liz Collins is an artist and designer. She presented her performance piece, Knitting Nation, at the Tang as part of the exhibition Dance/Draw (2012), which she has also shown at eleven other locations, including the Rhode Island School of Design, the Institute of Contemporary Art, Boston, and the Museum of Modern Art: Studio. Her recent work explores the boundaries between painting, fiber arts, and installations, creating spaces that envelop the viewer in vibrating color fields.

Highlighting the nature of Energy Field as a space for interconnections to flourish, Collins invited artist friends to become Guest Artists within the installation; she asked them to explore and be in dialogue with her installation via their own artistic practice. Setting the stage for this series of dialogues with the space, Collins presents her personal community of artists and friends through a selection of books, magazines, ‘zines, and comics they created and provided.

Nayland Blake (February – June 2016) carried forward the idea of celebrating existing relationships and creating new ones within the space, in his installation. Sock monkeys, photography, and video formed a narrative of loss and healing, filtered through humor, memory, and collaborative connections. The video, which documents Collins mending one of Blake’s prized sock monkeys, evokes to the process of physical and psychological healing through artistic friendship.

The third Guest Artist, E.V. Day, probes ideas about sexuality, feminism, and humor. Day’s installation, Perpetual Motion Perpetual Motion, is a site-specific work composed of seven fishnet body suits stretched across the mezzanine window, and is a response to the June 12 tragedy in Orlando, Florida.

Day uses elastic cords trussed to an industrial frame that pull the fishnet fabric at precise points, articulating seven dancing figures. Among Day’s references in this commentary on issues of visibility and the gender spectrum are Ernie Barnes’ 1976 painting Sugar Shack (and its themes of exclusion), the wire-frame modeling that articulates three-dimensional forms in two dimensions, and the defiance of bodies in motion.

In it’s fourth instance, Guest Artist Leah DeVun, in collaboration with Lauryn Siegel, presents a three-channel video work called The Summit. Based on the life of Ethel Smyth, a pioneering opera composer, suffragist, lesbian, and mountain climber who flouted conventions of gender in the early twentieth century, the video draws from both Smyth’s biography and the Greek myth of Sisyphus. Smyth famously threw a stone at the window of an anti-suffragist politician during a protest, an action that landed her in jail, where she conducted her fellow protesters in her feminist anthem “March of the Women” (which provides the central musical theme of the video). By evoking the Sisyphusian “uphill battle” DeVun comments on the battle faced by modern-day queer and transgender activists. The Summit invokes a long history of queer lives to suggest how we might reimagine and ultimately embrace the futility of the never-accomplished task.

The fifth and final instance of the Guest Artist Project features two video installations, one by Laurel Sparks entitled Black Light Monologue—which addresses themes of rebellion and feminism—and the other by SKOTE (Alex P. White and Jill Pangallo). SKOTE presents a video series called destiNATION, which utilizes the unpredictability of public interventions, tourism, costumes, and improvisational movements to evoke an alternate universe. As directors, choreographers, designers, and performers, their work is a hybrid of dance for camera and video installation with a distinct style rooted in the queer history of camp, mime, clowns and 70’s pedestrian movement practices. The tourist industry and the advent of social media have made the entire world seem more accessible and more familiar than at any other time. Yet when so much of our perception is mediated by shared images and scenarios created for the tourist economy, we are never quite certain if our assumptions of “place” are grounded in historical reality or generated for our consumption. With the destiNATION series, SKOTE employs various strategies of displacement and de-familiarization within the context of the “vacation” to explore this question.

Liz Collins — Energy Field is organized by the Tang Museum in collaboration with the artist and is supported by the Friends of the Tang.
Anchor name: Guest Artist
Guest Artist Project

Liz Collins — Energy Field includes the Guest Artist Project, an installation within the installation that features a rotating roster of work by other artists.

Liz Collins — Energy Field is organized by the Tang Museum in collaboration with the artist.
twtweet this
fbshare on facebook 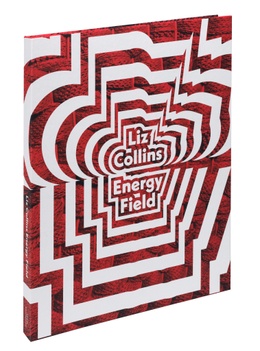