The World According to the
Newest and Most Exact Observations: Mapping Art and Science

Focusing on two specific domains, the human body and northeastern North America, The World According to the Newest and Most Exact Observations: Mapping Art and Science examined how we depict realms inaccessible to our senses. Artwork by eighteen contemporary artists combined with five centuries of maps and atlases, scientific objects, and genetic sequencing equipment to explore mapping as a creative act that both reflects and shapes our perceptions of reality. Together, the works illustrated how the unavoidable processes of organization, simplification, and adjustments in scale both obscure and illuminate the things they represent. The objects and artworks demonstrated the history of mapping is not just the story of how humans have found their way through the physical space of land masses, rivers, cities, towns, and the next frontier; it also reveals the metaphorical ways in which we have discovered and dealt with complex concepts and ideas about our world and our perception of it.

A catalogue including essays by Susan Bender, Bernard Possidente, and Richard Wilkinson, is available. Also included in the catalogue are entries on the artists by Skidmore students and illustrations of the installation at the Tang.

The World According to the Newest and Most Exact Observations: Mapping Art and Science was the first faculty co-curated exhibition presented at the Tang and employed a successful blend of disciplines, including anthropology, biology, and art.

This exhibition was made possible with support from Mapinfo Corporation, the Henry Luce Foundation, Alan Voorhees, and the Friends of the Tang.

The World According to the
Newest and Most Exact Observations: Mapping Art and Science 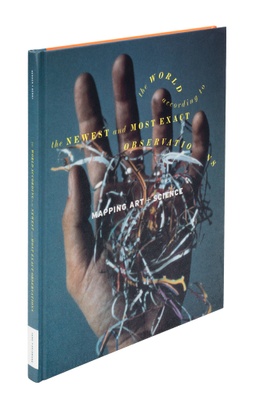