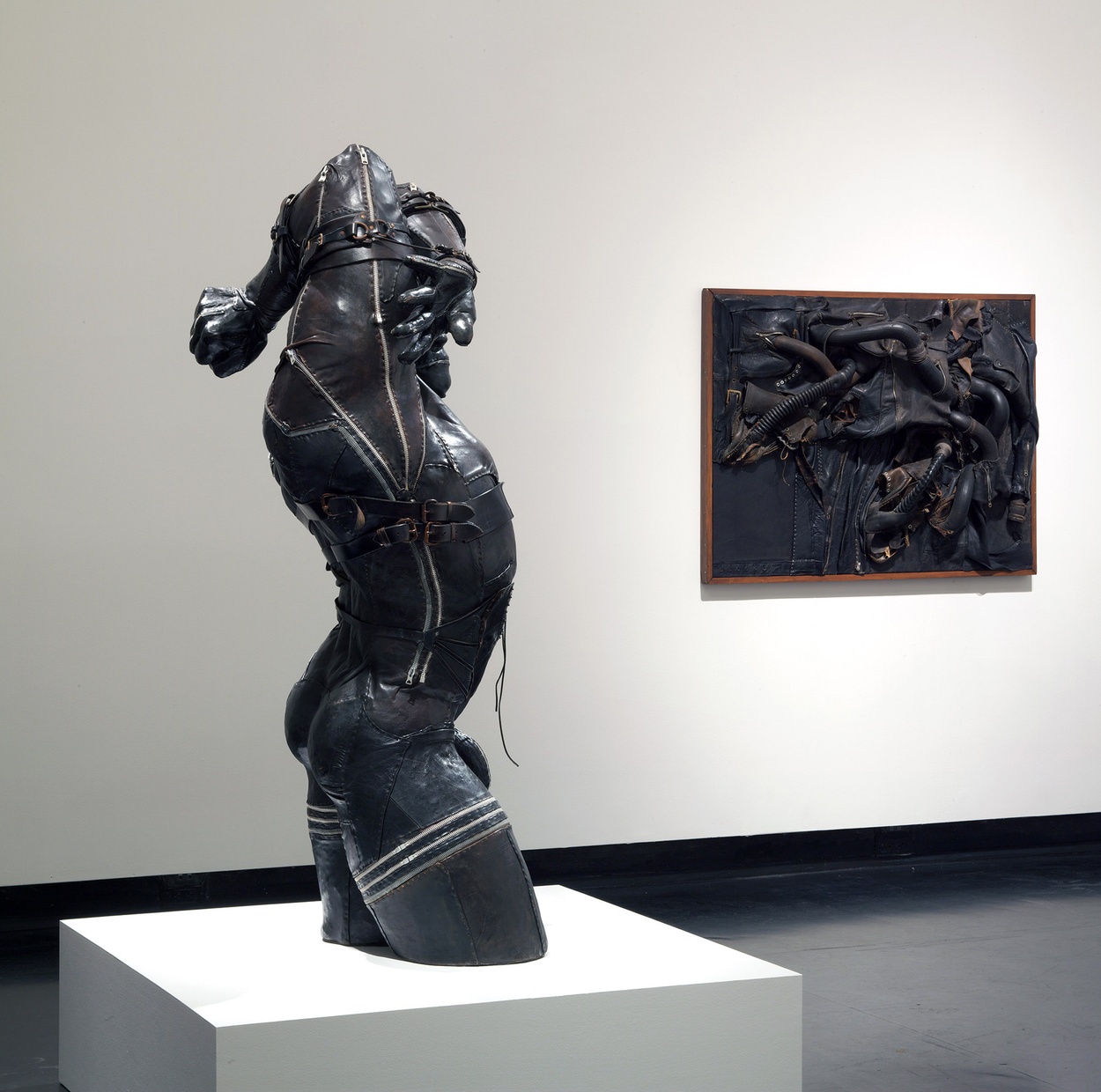 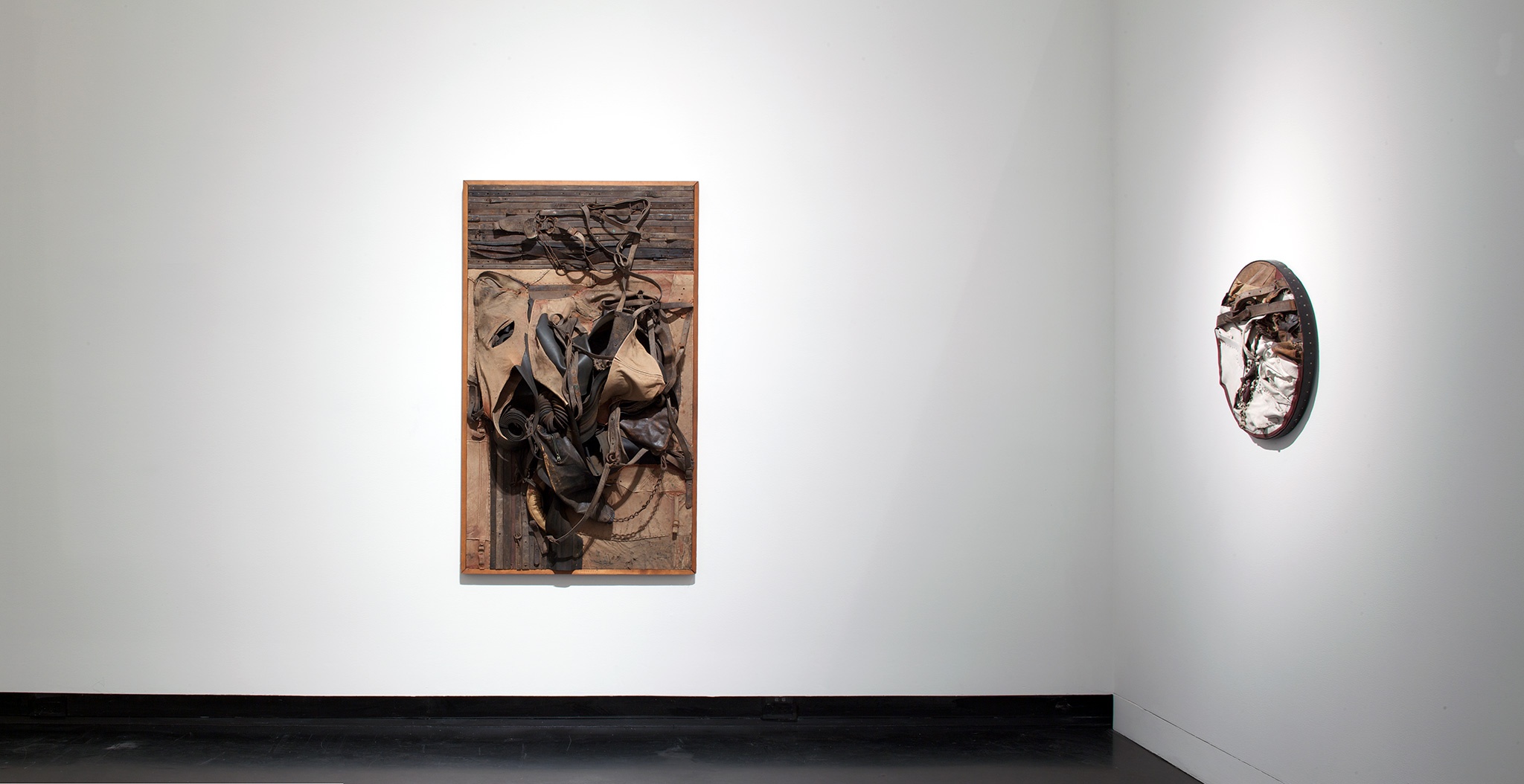 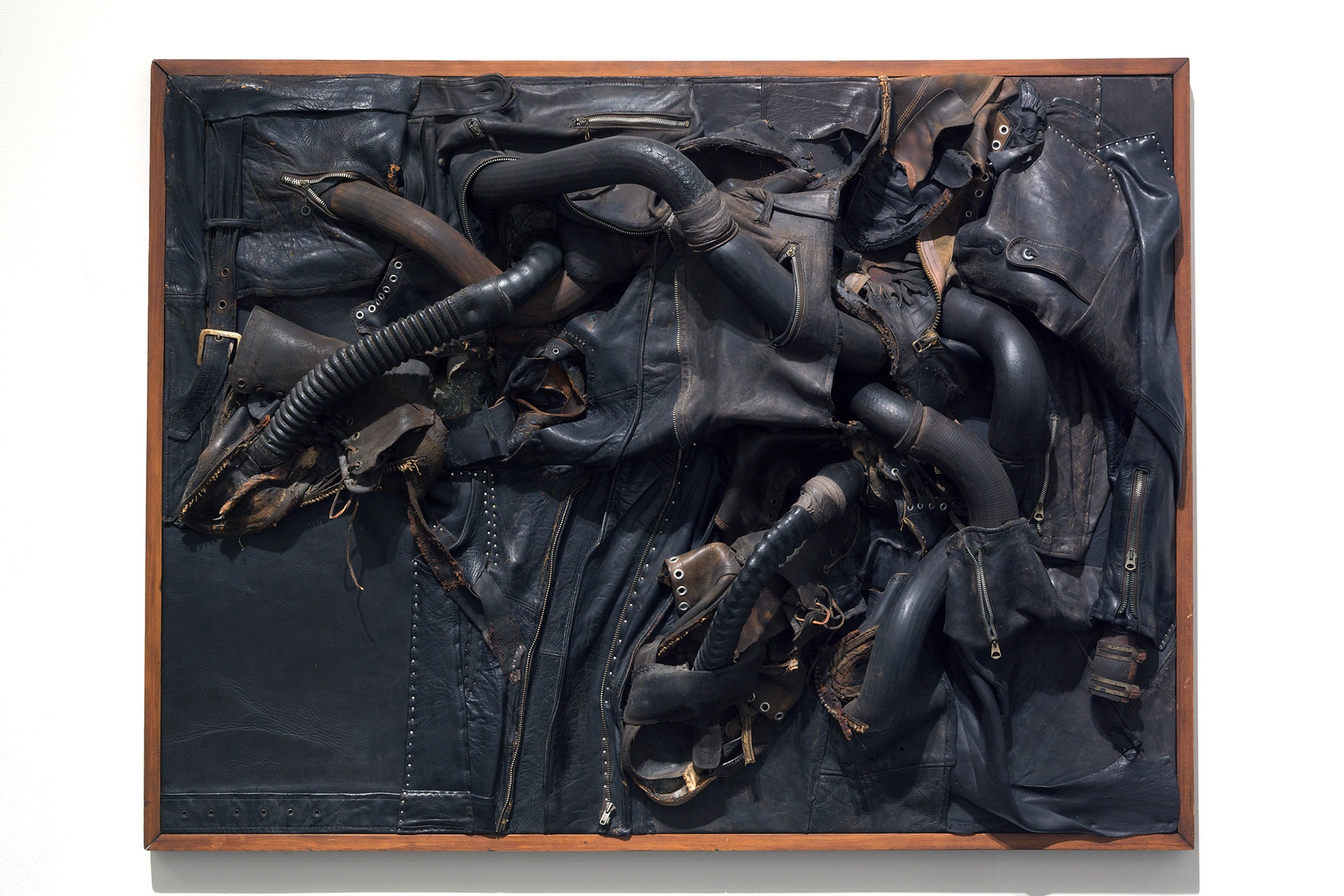 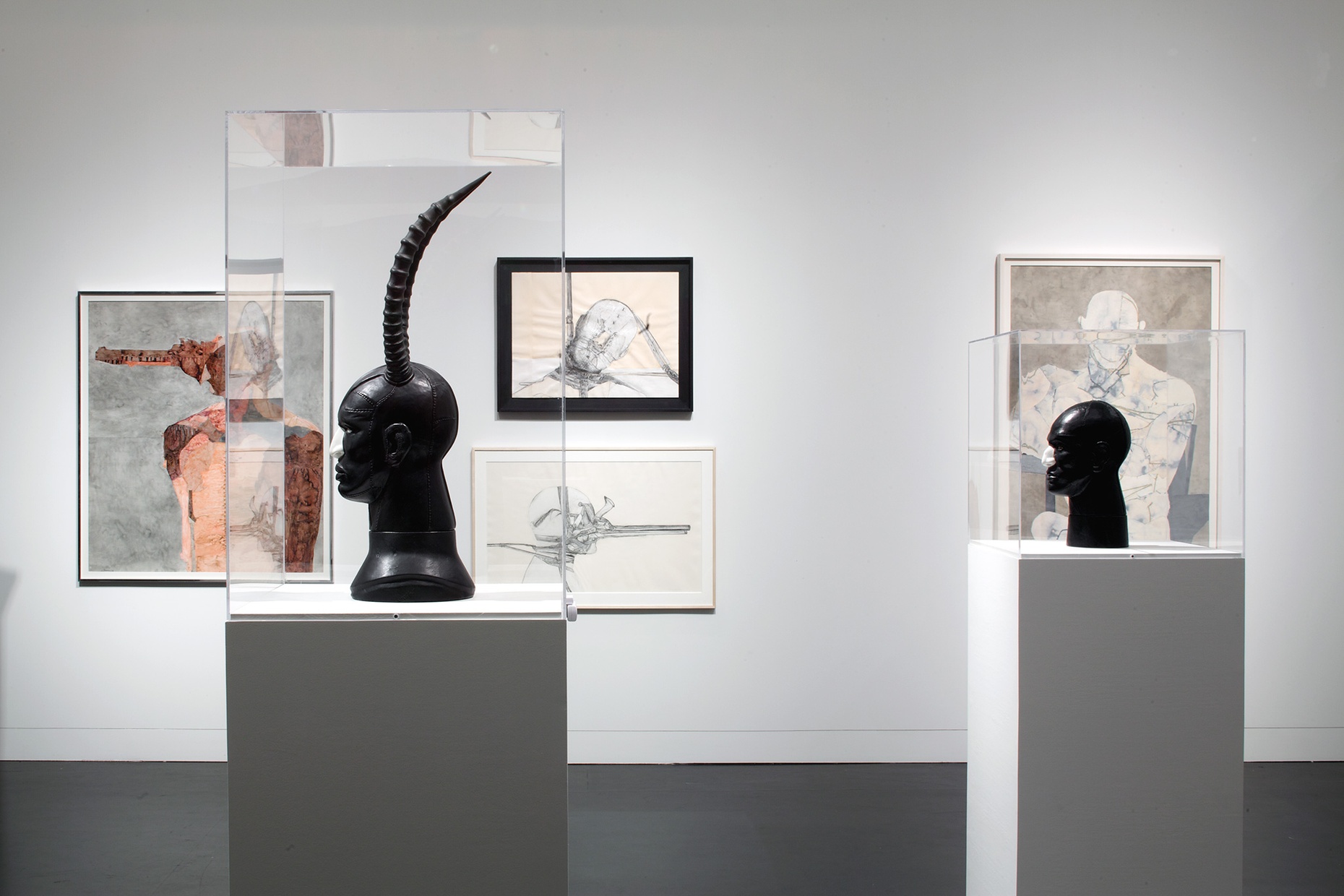 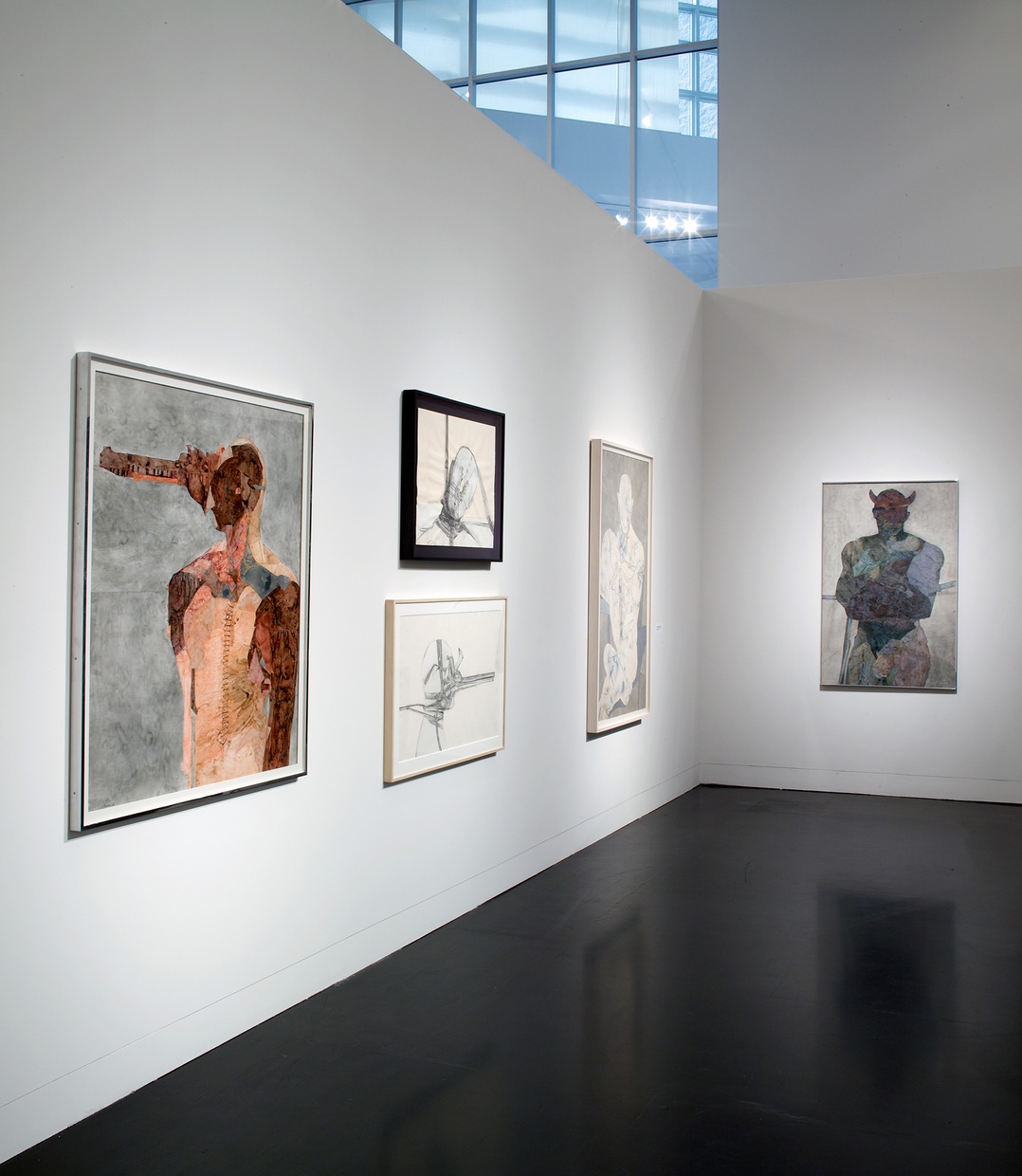 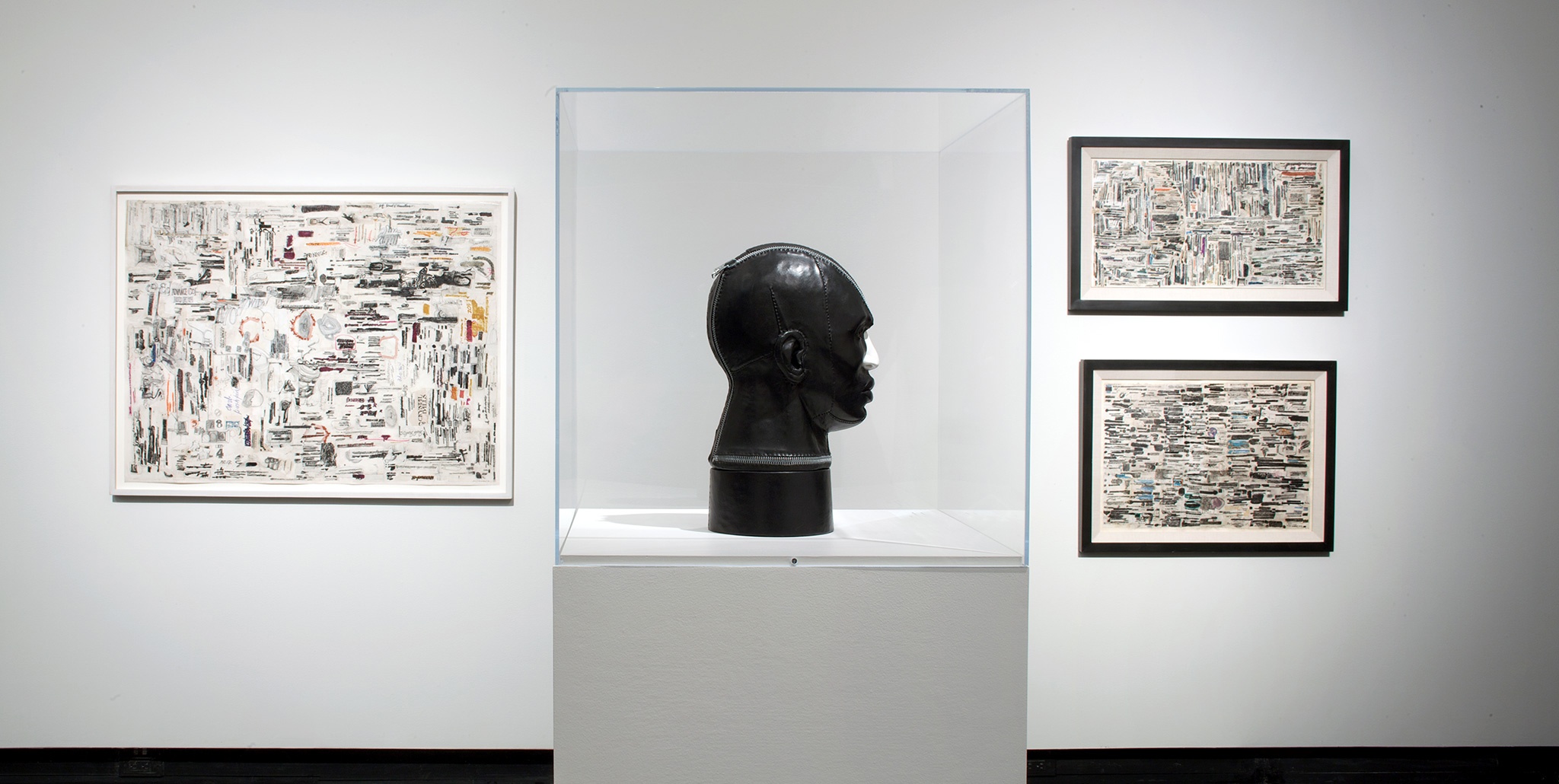 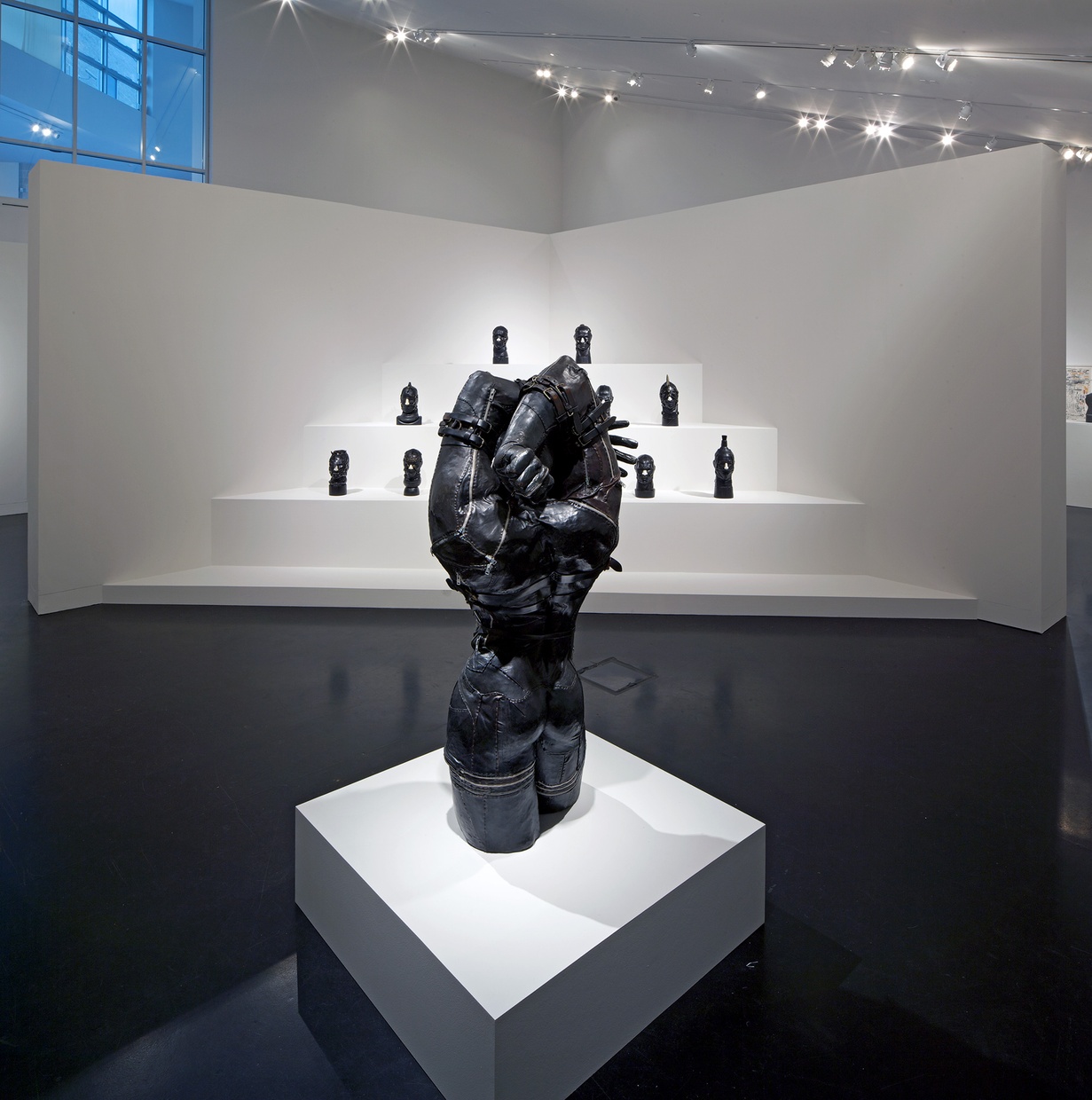 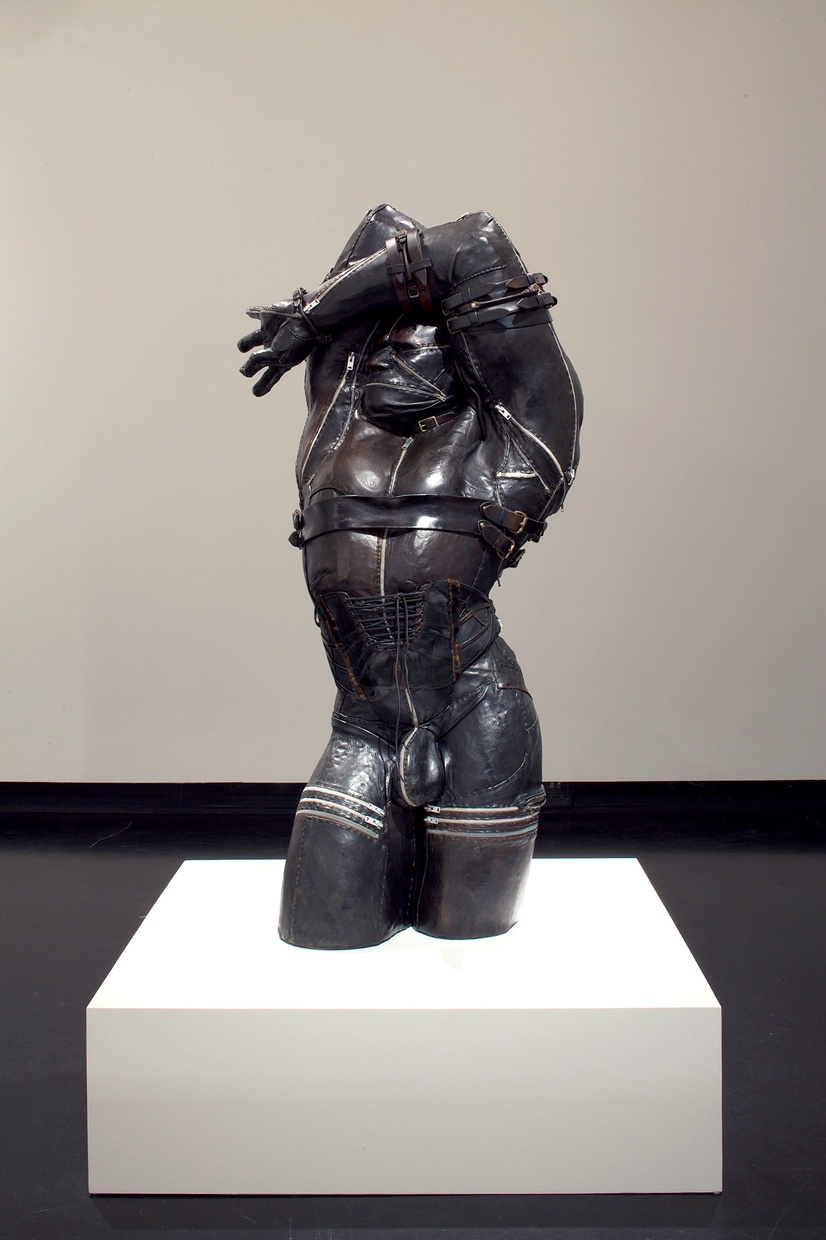 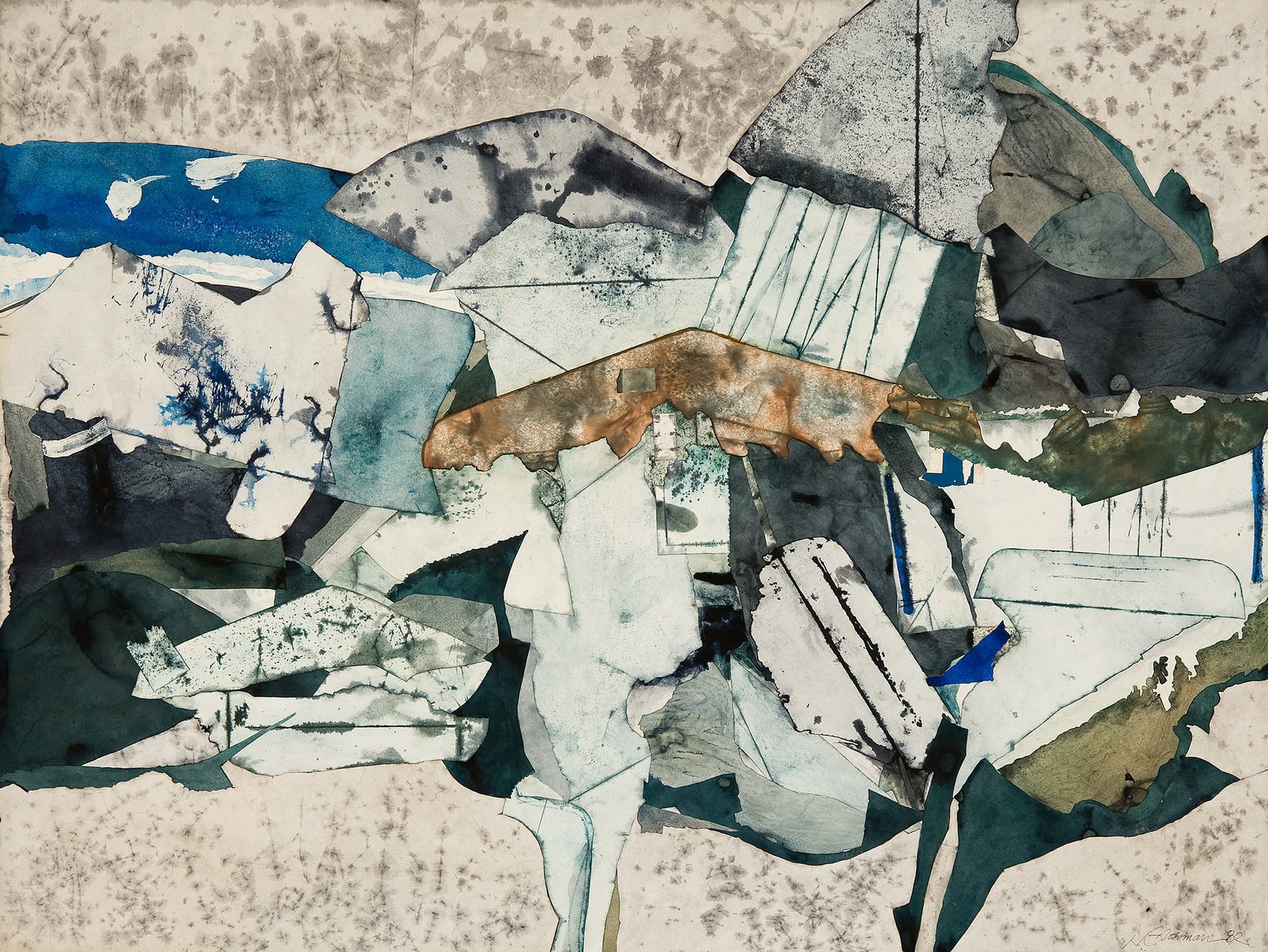 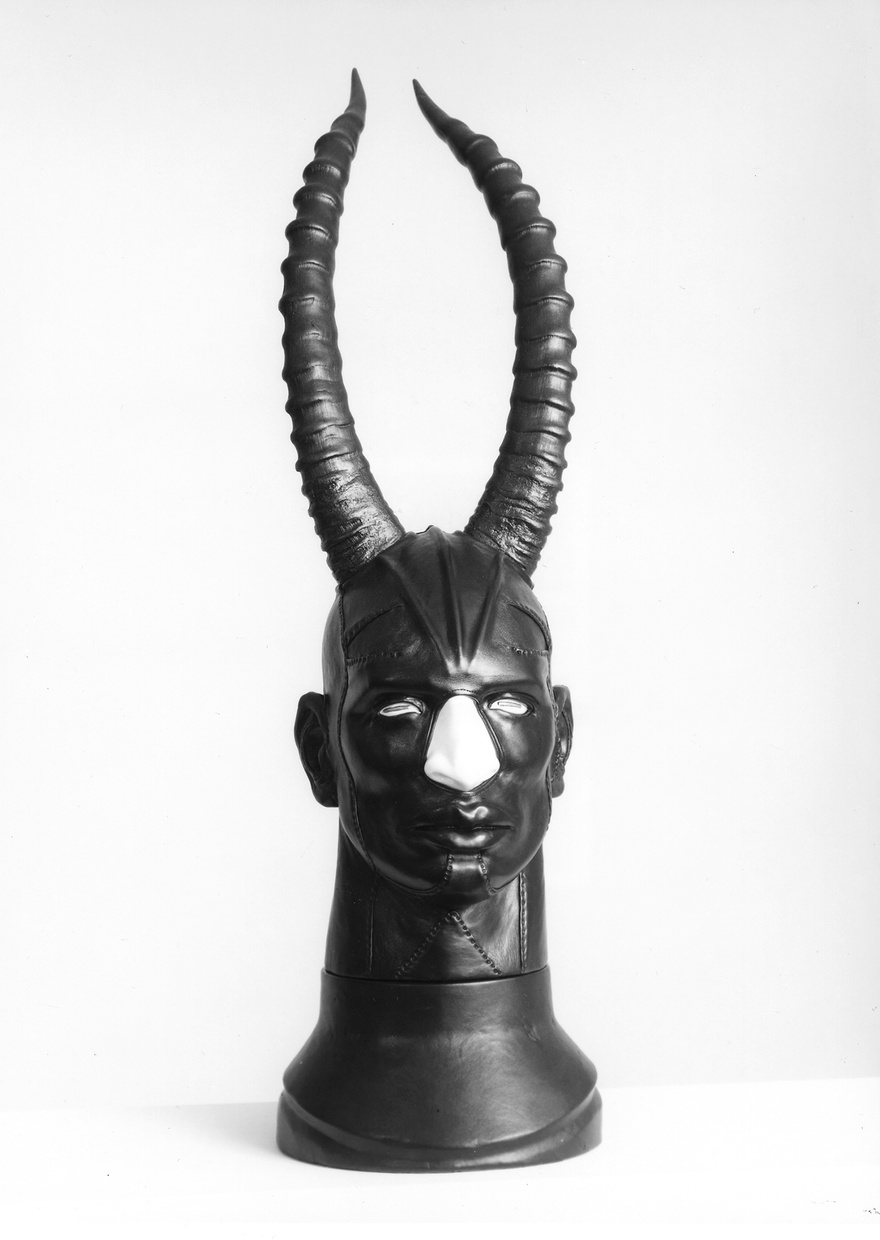 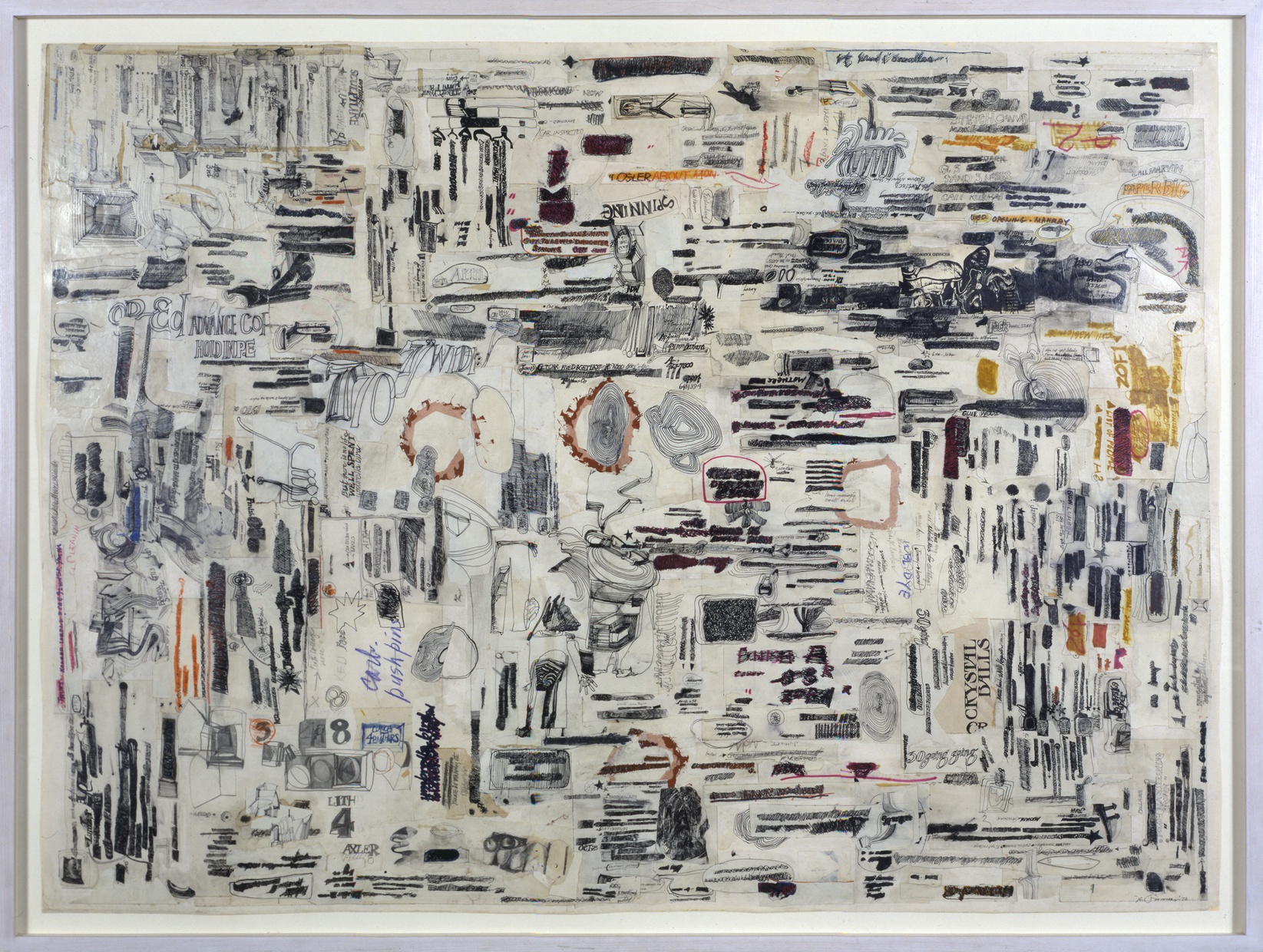 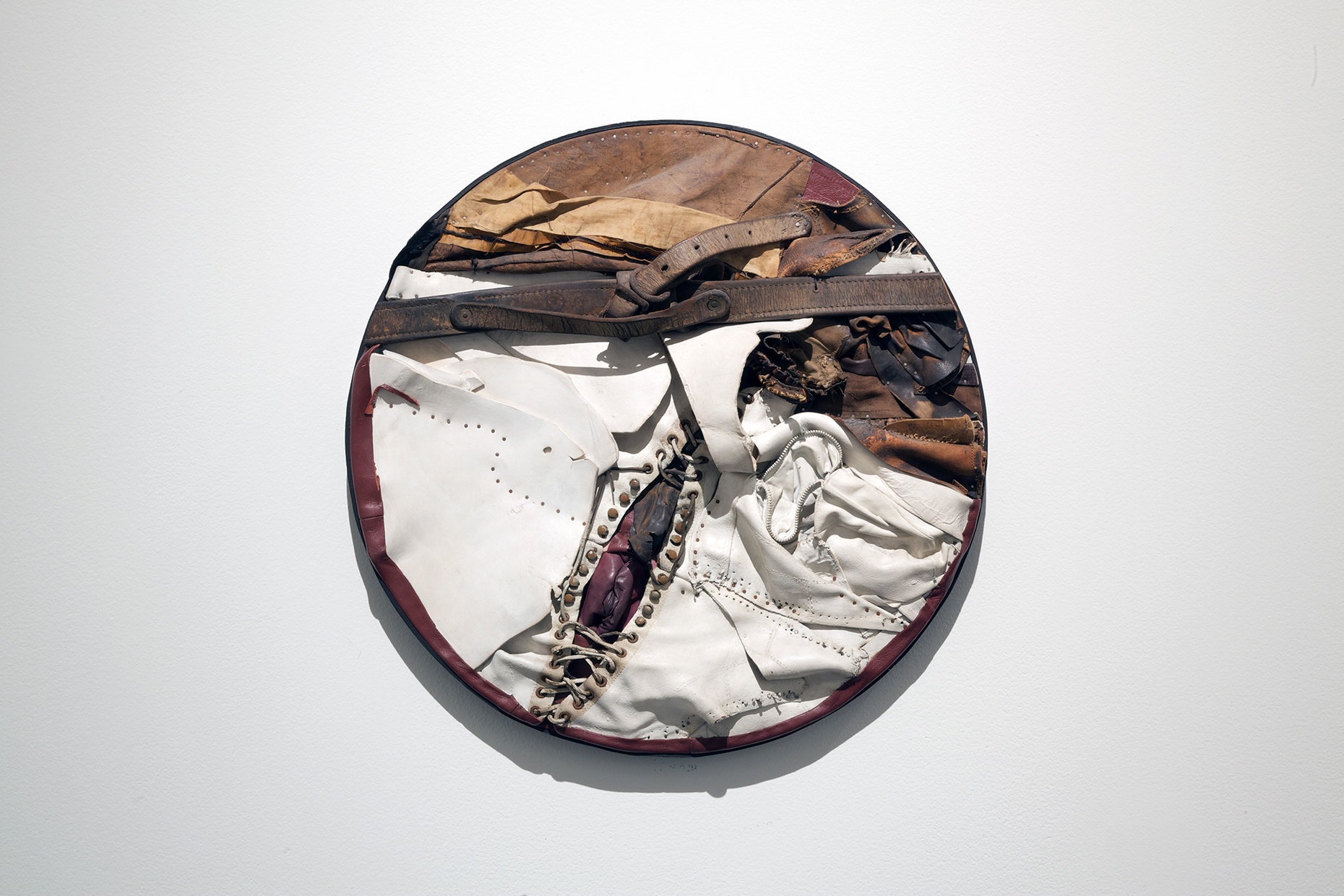 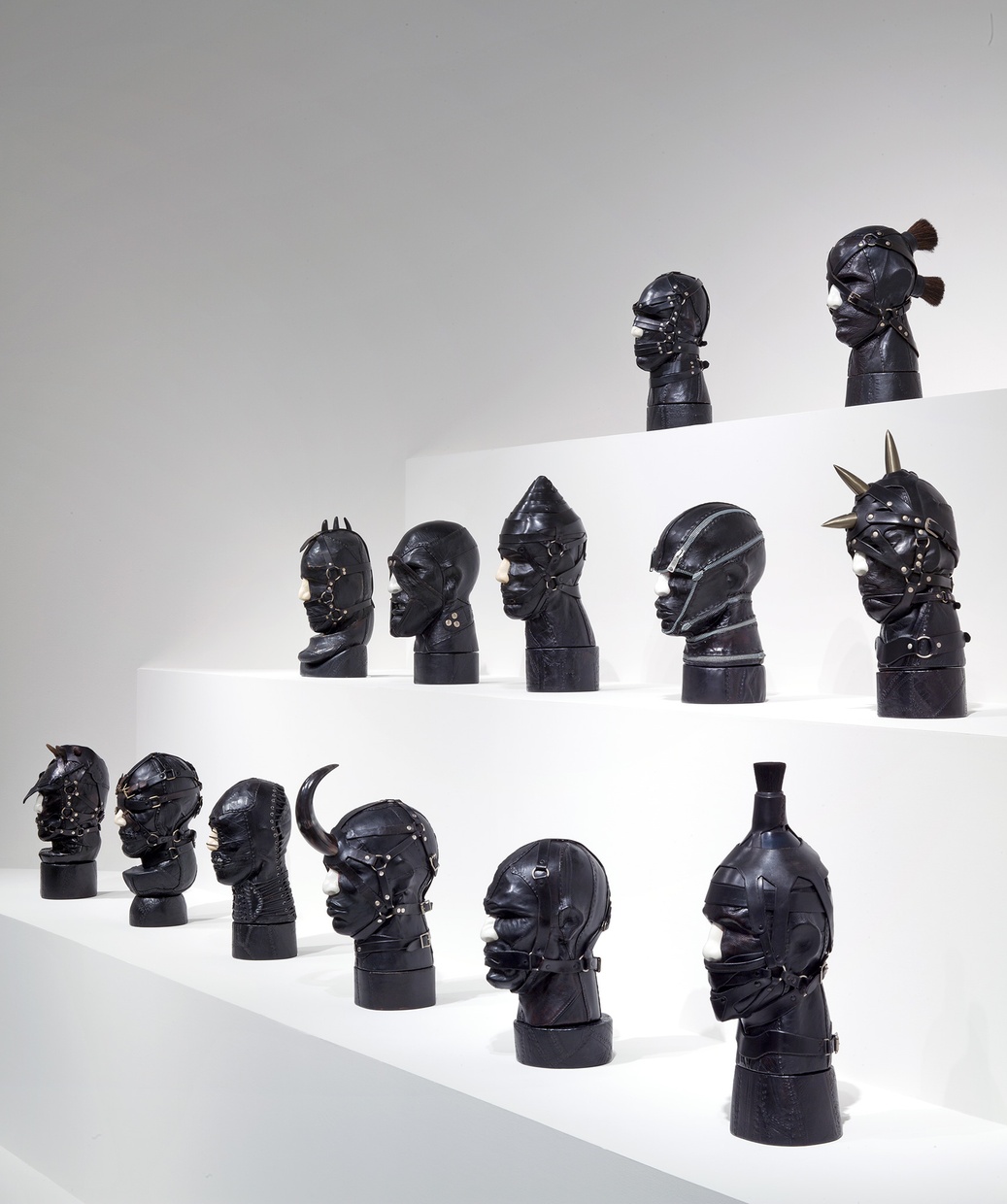 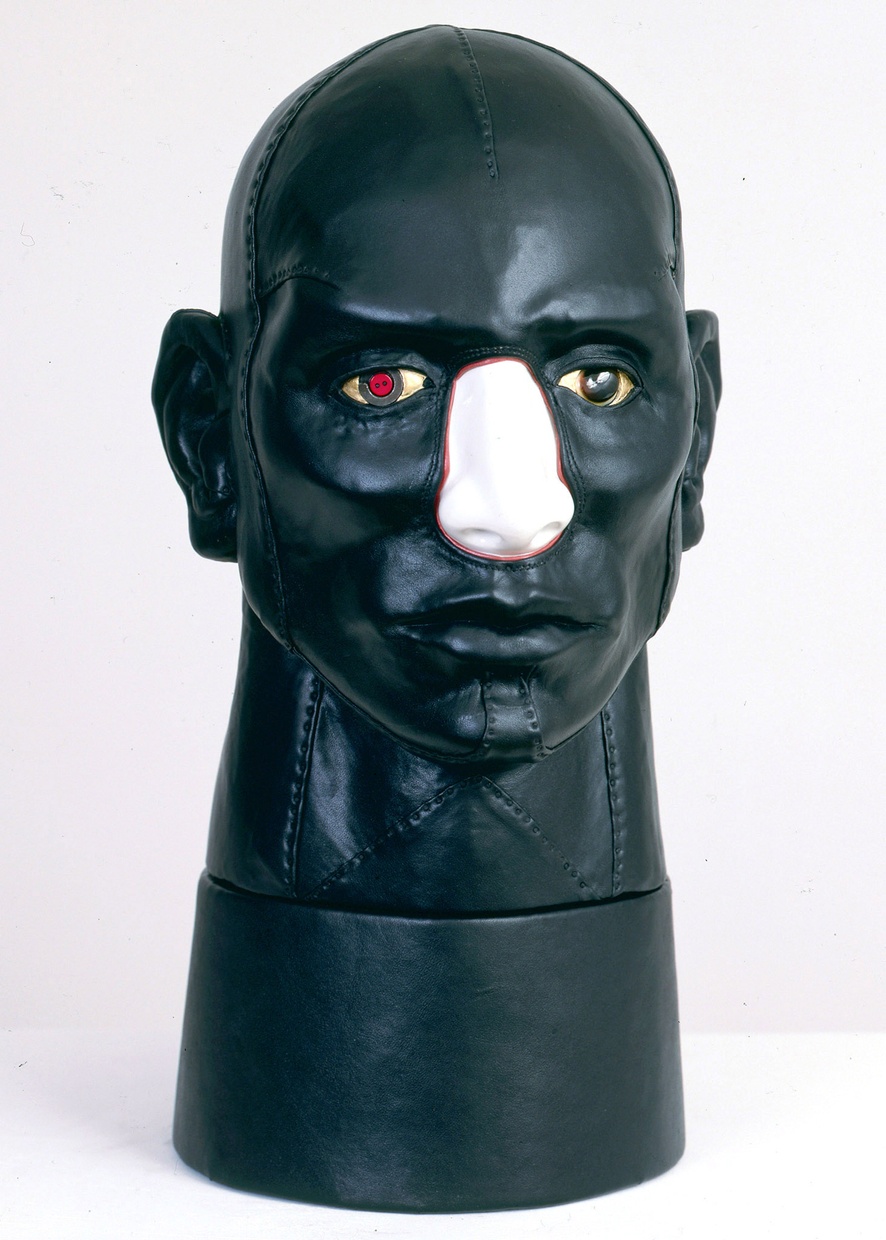 Nancy Grossman: Tough Life Diary brings together work from the past fifty years to demonstrate the wide-ranging, challenging nature of this important yet still largely under-appreciated artist. For over five decades, Grossman has created a powerful body of work that combines exquisite craftsmanship with a long-standing exploration of the nature of violence and power. The exhibition will feature a range of work from the artist’s immense oeuvre, including drawing, painting, printmaking, collage, assemblage, and sculpture.

Born in New York City in 1940, Nancy Grossman moved with her family to a farm in Oneonta, New York at the age of five. Her parents worked in the garment industry and at sixteen Grossman joined them as a “dart and gusset girl,” influencing her future use of leather, zippers, dyes, pattern making, and sewing in her artwork. From 1957 to 1962, Grossman studied at Pratt Institute, where she received her BFA. At Pratt, Grossman met artist Richard Lindner, who would become a longtime mentor and friend, and experimented in a range of mediums including lithography, woodcut, drawing, and painting. Grossman’s penchant for material experimentation—which would only expand throughout her career—was very much at odds with the prevailing sentiment at the time to develop a signature style. Abstract Expressionism dominated the New York art scene, and Grossman was loosely connected with many of these artists and often patronized popular haunts such as the Cedar Tavern and Max’s Kansas City. Yet she also felt distinctly aware of her differences: “It was simply too much of a challenge for a young woman to announce that she was an artist,” Grossman explained in the 1960s. “Because all artists were feminized, male artists bent over backwards to present their most macho aspect.”

After traveling Europe in 1962 on Pratt’s Ida C. Haskell Award for Foreign Travel, Grossman returned to New York. Two years later, at only twenty-three, she had her first solo exhibition at New York’s Krasner Gallery of collages, constructions, drawings, and paintings; by 1967 her work was featured in three additional solo shows at the gallery. 1964 also marked her move into a large studio in Chinatown’s Eldridge Street, where she continued working for thirty-five years. As Arlene Raven noted, her studio’s “change of scale proved revolutionary for Grossman’s work: she began to make wall assemblages and free-standing constructions of at least six feet by four feet.” Using discarded cloth, leather, and metal parts, Grossman fashioned “chaotic, tumbling reliefs that bring Abstract Expressionist brushwork into real space.” During the mid-1960s, Grossman also began experimenting with the form and subject of a “totem"—a theme she would continue working with for several decades. Her freestanding totems of 1966 and 1967 bring together an array of found objects, such as typewriters, steel brushes, corn huskers, and metal signs forming six-foot high pillars to the detritus of 1960s America.

In a 1969 solo exhibition at New York’s Cordier and Ekstrom Gallery, Grossman first exhibited her life-size leather covered heads, a body of work she would continue through the mid-1990s. Carved out of wood and tautly covered with leather (often recycled from old leather jackets), Grossman’s sculptural heads quickly made her both “renowned and suspect” (Raven). Frequently described as "disturbing,” these images “blew conventional images of femininity to smithereens,“ as critic Holland Cotter noted. Typically taking over a year to complete, each head is carefully carved out of wood, often fitted with dentures and poured liquid rubber molds before tautly covered with black leather, and adorned with zippers, spike, straps, and horns. Cordier and Ekstrom Gallery represented the artist for the next twelve years, including four solo exhibitions during the 1970s.

The trappings of constraint would continue throughout much of Grossman’s work, including drawings, collage paintings, and sculptures of male figures struggling against restraints. With their imposing muscular bodies and exquisite draftsmanship, her drawings have often been likened to Renaissance and Mannerist works. As critic Donald Kuspit noted, “She pulls out every linear stop, insisting on the integrity of the lines that define her figures yet varying their density so rapidly within the same work that they seem sometimes like feathers in a vacuum, sometimes ominously heavy and urgent.” In the early 1970s, while disenchantment and frustration with the Vietnam War raged on, Grossman began a series of drawings and collage paintings that depict guns strapped across a figure’s eyes, nose, and mouth—an appendage that appears both foreign yet strikingly permanent to the body.

Since she began making art in the 1950s, Grossman has steadily explored collage with a similar experimentation and attention to materials. Many of her collage works are constructed from paper segments hand-dyed with permanent inks, watercolors, acrylics, and aniline dyes, and often washed several times to create richly saturated paper. While the majority of Grossman’s works concern the physicality of the body, many of her collages and assemblages are dense, abstract compositions, such as Tough Life Diary (1973), created from words and fragments cut from the artist’s diaries, and Light is Faster than Sound (1987–88), which combines dyed paper with an image of Lyndon Johnson and found scraps and fliers.

In 1970, New York Times critic John Canaday described Grossman’s artwork—and her attention to humanistic concerns he felt largely absent in 1950s and ’60s American art—as a “triumph of an independent sensibility.” In describing her own feelings toward art-making, Grossman explained her need to find “a chance equilibrium between going to war in my studio as the Vietnam War hottened outside over there and politics nearly exploded out here. On this tautest of tightropes, I dared to make grand gestures, racing out to the end of the limb and trusting that I would not fall.”

A range of selections from Grossman’s rich body of work were shown together for the first time in a 1990 traveling survey organized by Long Island University’s Hillwood Art Museum. Ten years later, Michael Rosenfeld Gallery organized the exhibition, Nancy Grossman: Loud Whispers, which featured collages, assemblages, and leather-covered heads from the 1960s to 2000. Her work has been included in numerous group exhibitions around the world including the recent exhibitions: Skin is a Language, Whitney Museum of Art, New York; WACK! Art and the Feminist Revolution, 1965-1980, Los Angeles Museum of Contemporary Art, Los Angeles; The Third Mind, Palais de Tokyo, Paris; and Reconfiguring the Body in American Art, 1820-2009, National Academy Museum of Art, New York.  In 2011, a selection of her sculptural heads was featured in the solo exhibition Nancy Grossman: Heads at P.S.1 Contemporary Art Center in Long Island City, and a series of collages and assemblages influenced by volcanic landscapes were on view in Nancy Grossman: Combustion Scapes at Michael Rosenfeld Gallery.

Nancy Grossman: Tough Life Diary is curated by Ian Berry and will be on view at the Tang Museum from February 18 through May 20, 2012 and offered as a touring exhibition through 2014 to museums across the U.S. A comprehensive catalogue will accompany the exhibition, chronicling the history of Grossman’s work through images, historical essays, and new scholarship. This will be the first such publication and major museum retrospective for Grossman. 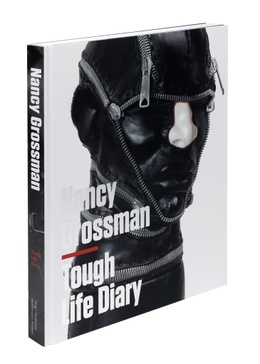 Ian Berry
Curator
i
Pattern by Madeleine Welsch ’17
Inspired by the exhibition Someday is Now: The Art of Corita Kent
The Tang Pattern Project celebrates the Museum’s 20th anniversary. Organized by Head of Design Jean Tschanz-Egger, past and current Tang Design Interns created patterns inspired by the Museum’s exhibition and event history.
See all patterns