From wall arrangements that map the work of 17th century Flemish painter Jan Bruegel the Elder to a sound piece made in collaboration with a mathematician and classically trained singer, Suzanne Bocanegra’s work springs from creative dialogues with a range of collaborators. This exhibition focuses on five major recent works that show the range of the artist’s work, from sculpture and drawing to sound and video, and includes the first showing of a new work combining live dance with recorded sound.

Translation forms the heart of Bocanegra’s process. Her work includes a series of pieces that transform two-dimensional art historical source materials into three-dimensional installations. For her recent works, Bocanegra expands on her use of these sources, exploring their potential “not just as templates for another static work of art, but as a script, a musical score, or an instruction for how to move, or how to behave.”

These recent pieces spill out of the studio in live performances that layer music, dance, theater, and audience interaction. An ancient fragment of Danish fabric inspired Bocanegra’s 2009 Rerememberer (All the Threads). The textile’s patterns provided a template for an hour-long performance with a weaver working on an amplified loom, a Danish accordionist, a sound designer, a lighting designer, a conductor, and fifty untrained violinists. For I Write the Songs (2009), Bocanegra invited the audience to create drawings on sheets of music that were then interpreted by the FLUX Quartet and bound into handmade scores.

Bocanegra’s new work, Little Dot, starts with Georges Seurat’s painting Young Woman Powdering Herself (1889). For the piece, Bocanegra counted and sorted all the dots from the painting, and translated them into a script for a dance using a single, elemental ballet movement that creates a punctuated dot like sound. A live dancer will periodically perform Little Dot in the gallery, adding live sounds to Bocanegra’s soundtrack of recorded dance steps.

Born in Houston, Texas, in 1957, Suzanne Bocanegra received her BFA from the University of Texas, Austin, in 1979, and her MFA from the San Francisco Art Institute in 1984. Her work has appeared in exhibitions at the Victoria and Albert Museum, the Serpentine Gallery, the Hayward Gallery, London; the Fabric Workshop and Museum, Philadelphia; UCLA’s Hammer Museum; and elsewhere. Her performances have taken place at such venues as the Museum of Modern Art in New York, the New Haven Festival of Art and Ideas, the River to River Festival and the Athelas Festival in Copenhagen. Bocanegra lives and works in New York.

Opener 21: Suzanne Bocanegra: I Write the Songs is organized by Ian Berry, Susan Rabinowitz Malloy ‘45 Curator of the Tang Museum, in collaboration with the artist. The Opener series is made possible with the generous support of the New York State Council on the Arts, the Overbrook Foundation, and the Friends of the Tang.

Opener 21: Suzanne Bocanegra: I Write the Songs is organized by Ian Berry, Susan Rabinowitz Malloy ‘45 Curator of the Tang Museum, in collaboration with the artist.
twtweet this
fbshare on facebook 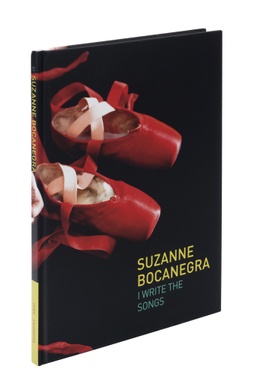