Los Carpinteros transform everyday domestic objects and common urban structures into grand, fantastical images. Inventive, humorous and at times disconcerting, their surreal amalgamations suggest all might not be what it seems. Their work investigates the mass of seemingly banal objects that surround us by suggesting their complex connections to class, mass production, and consumption.

Opener 19: Los Carpinteros combines drawings from the past ten years with recent sculpture by this Havana-based duo, Marco Antonio Castillo Valdes and Dagoberto Rodriguez Sanchez. Spanish for “the Carpenters,” their moniker underscores the importance of craft in their practice, aligning their studio in solidarity with communal artisan guilds and skilled workers. From a French garden made of twisted beds to a bath towel shaped like a swimming pool, Los Carpinteros’s distinctive imagery springs from the creative repurposing of objects common in Cuban daily life. Multilingual puns in their titles enrich many of their works, as with La Montaña Rusa, literally “the Russian mountain,” but also the term for roller coaster in French, Italian, Portuguese, and Spanish.

Castillo and Rodriguez began their collaboration as Los Carpinteros in the early 1990s, when they met at the Instituto Superior de Arte in Havana. The group’s third member, Alexandre Arrechea, left to pursue solo work in 2003. Over the twenty years of their collaboration, Los Carpinteros’s themes have gradually shifted from Cuban socio-political issues to reflect a more global and peripatetic practice. Their work has been featured in solo exhibitions at P. S. 1 Contemporary Art Center, Long Island City; University of South Florida Contemporary Art Center, Tampa; and Museo Nacional de Bellas Artes, Havana, among others. Los Carpinteros have participated in the 1994, 2001 and 2003 Havana Biennials and 2005 Venice Biennale, and group exhibitions at Centre Georges Pompidou, Paris; Museum of Modern Art, New York; Shanghai Art Museum; and Whitechapel, London.
Opener 19: Los Carpinteros is organized by Ian Berry, Malloy Curator of the Tang Museum, in collaboration with the artists. The Opener series is made possible with the generous support of the New York State Council on the Arts, the Overbrook Foundation, and the Friends of the Tang.

Opener 19: Los Carpinteros is organized by the Susan Rabinowitz Malloy ’45 Curator Ian Berry in collaboration with the artists.
twtweet this
fbshare on facebook 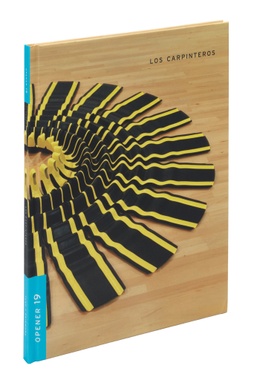