Conservator Heather Galloway visited the Tang Teaching Museum in June 2018 to finish her second round of conservation work on Lari Pittman’s Once a Noun, Now a Verb #1 (1997) before it would be displayed in the exhibition Give a damn. While completing this work, Galloway recorded a conversation with the artist.

Could you talk about the impetus for the painting Once a Noun, Now a Verb #1 and how the title relates to the work?

Looking back at 1997, we were very much involved in the culture wars in which we find ourselves once again. And I was looking at language and identity and how they might intersect. The title, Once a Noun, Now a Verb #1, discusses the possible mutability of language. We have many examples in our current language of making nouns into verbs. How does a noun become a verb or become a transitive verb? I’m always interested in that idea because it shows the mutability, porosity, and evolution of language.

At that time, I was also thinking about the mutability of my identity or the possible mutability of all identities. In those days, we wouldn’t have said queer identity; it was still called gay identity. And I was looking at how I could discuss that in the scale of a history painting. It was very much about asking, How do you look at the history of painting and try to put things into a painting that maybe historically weren’t there?

One of the beautiful things about a painting is its incredibly absorbent surface—“absorbent” in the sense that it absorbs the world around it at any given moment. In a funny way, I guess I have always been somewhat of a history painter but without necessarily being didactic. I’m interested in showing the history of the moment and all of its pathology as well as its wellness, and showing that one doesn’t trump the other; there’s a simultaneity of events, or a bittersweet nature of life where things fit side by side in complete contradiction, but they’re still part of the fabric of daily existence.

At that time, AIDS was a shadow over our culture as well as the world. I was very anxious about how one proceeds with establishing oneself as a person with complete cultural centrality, given that a lot of the prevailing discussion was about pathology as relating, incorrectly, to a specific part of the population. How do I put forth an idea of a happy, productive, fully integrated life as a gay person while at the same time, culture is overlaying blame onto my endeavors? I think those issues still occur. How do people of color in the United States feel about trying to put forth their best and be prosperous and live well and happy when a shadow is cast over them as criminals? It’s not a new idea, it’s just that I happened to be facing it at that time.

As I’ve worked across the surface, I am crossing paths with lightbulbs, with toilets and plumbing, cityscapes. There are all of these heads with sunglasses on, with tails, so I start to think about sperm. I’m not positive I’m reading that correctly. There are roses and these trails of raised green decorative elements that move up and down. Can you talk about some of this imagery?

The way you are describing it, you are describing all these nouns having the qualities of verbs. All these things that are connecting, that are crossing, that are communicating. What I tried to show in the painting was the vitality of life. The painting is, first and foremost, celebratory. The challenge for me is, how do I make a painting that is fundamentally celebratory when showing that one of the main protagonists is a toilet? I wanted the toilet not to be an abject idea, but to show that it was part of life, as are the telephone poles, the plumbing, the lightbulbs, all the mechanisms, the chandelier, the wallpaper, the cityscape. All of this is fully integrated in a kind of holistic totality. Personal desire is also completely integrated into the holistic desire of a cityscape. 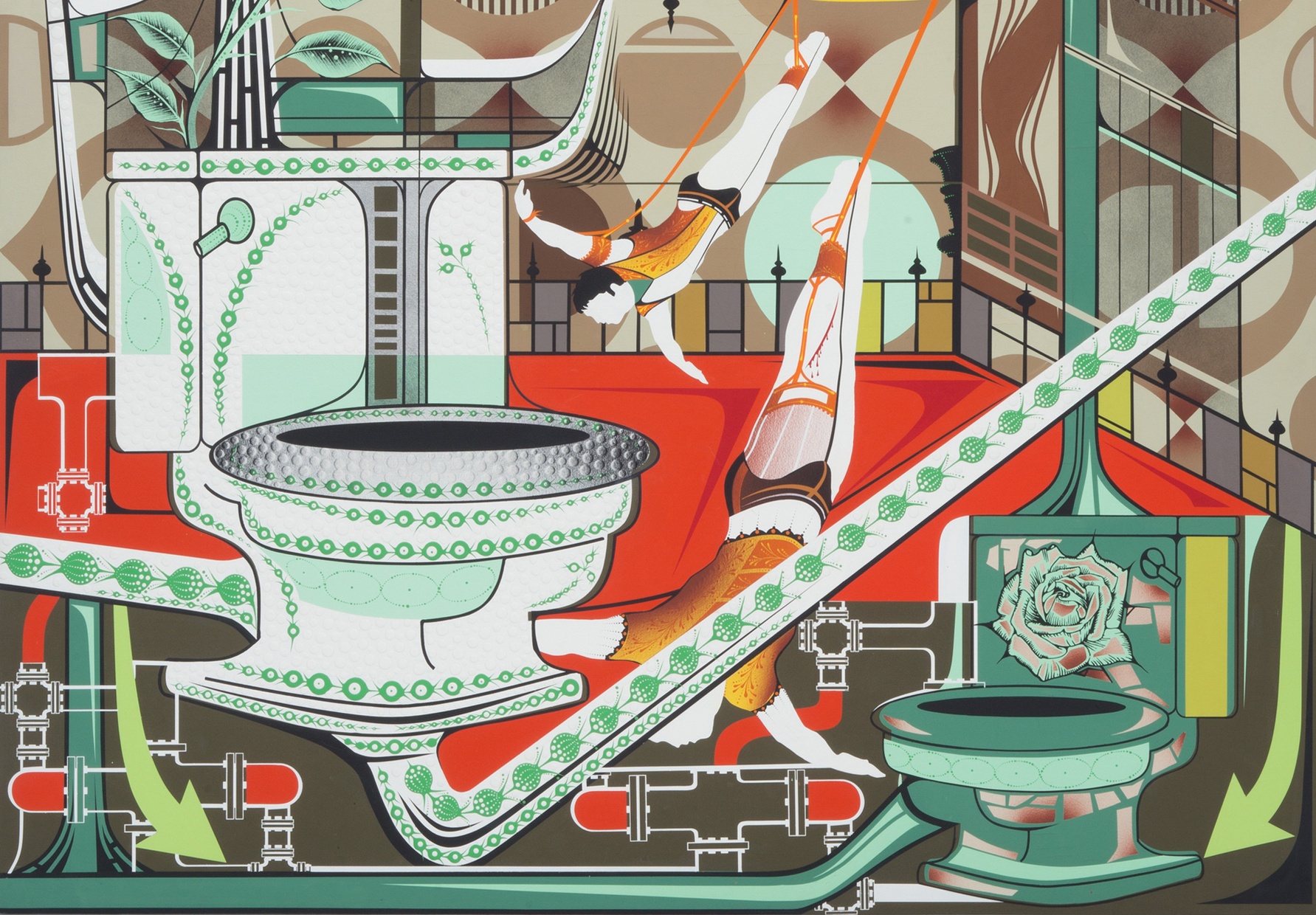 There is a celebration, but as I mine between cobwebs and all of the other things, there are acrobats who have scars, or slices, and other moments of discomfort.

The scars on the acrobats are not necessarily macabre, but well-earned somehow. I think the fundamental optimism of the painting is in the face of some sort of either personal or cultural pathology.

I absolutely appreciate the idea of moving beyond scars. I hold all of mine dear to me at any moment of challenge.

Let’s look at the painting from the ground up. You begin with solid-colored panels. How do you see your way through to getting the unified composition? How do you start?

Maybe this comes from my training at CalArts. I’m not a prep drawer. I make notations just on a piece of paper. So, the first concern is how to create a city skyline in the background. Then, I wanted to carve out interior spaces, which is where the chandelier and the toilet are. And that’s almost like a stage set but indicates an interior. The final attachment of the framed pieces would be asking, How do I further decorate both the cityscape and the interior space as if the whole thing were one continuum—like a single wall? In other words, it becomes one huge room, the city skyline and that interior space.

So you had a conception that the framed works would be there?

Yes. Although I’m not a religious person, I love how Western European religious painting is constructed to advance a tight narrative. I like the function of the predella in altarpieces where you have the main event, which would be an image of Christ or the Virgin Mary, at least in Catholicism. And then at the lower level, you would have the smaller sequence of paintings, which shed light on the mystery of the main image. The attachment of these framed drawings on top of the painting comes out of this idea of the religious convention of the altarpiece where you have a predella either below or next to the larger visual event. 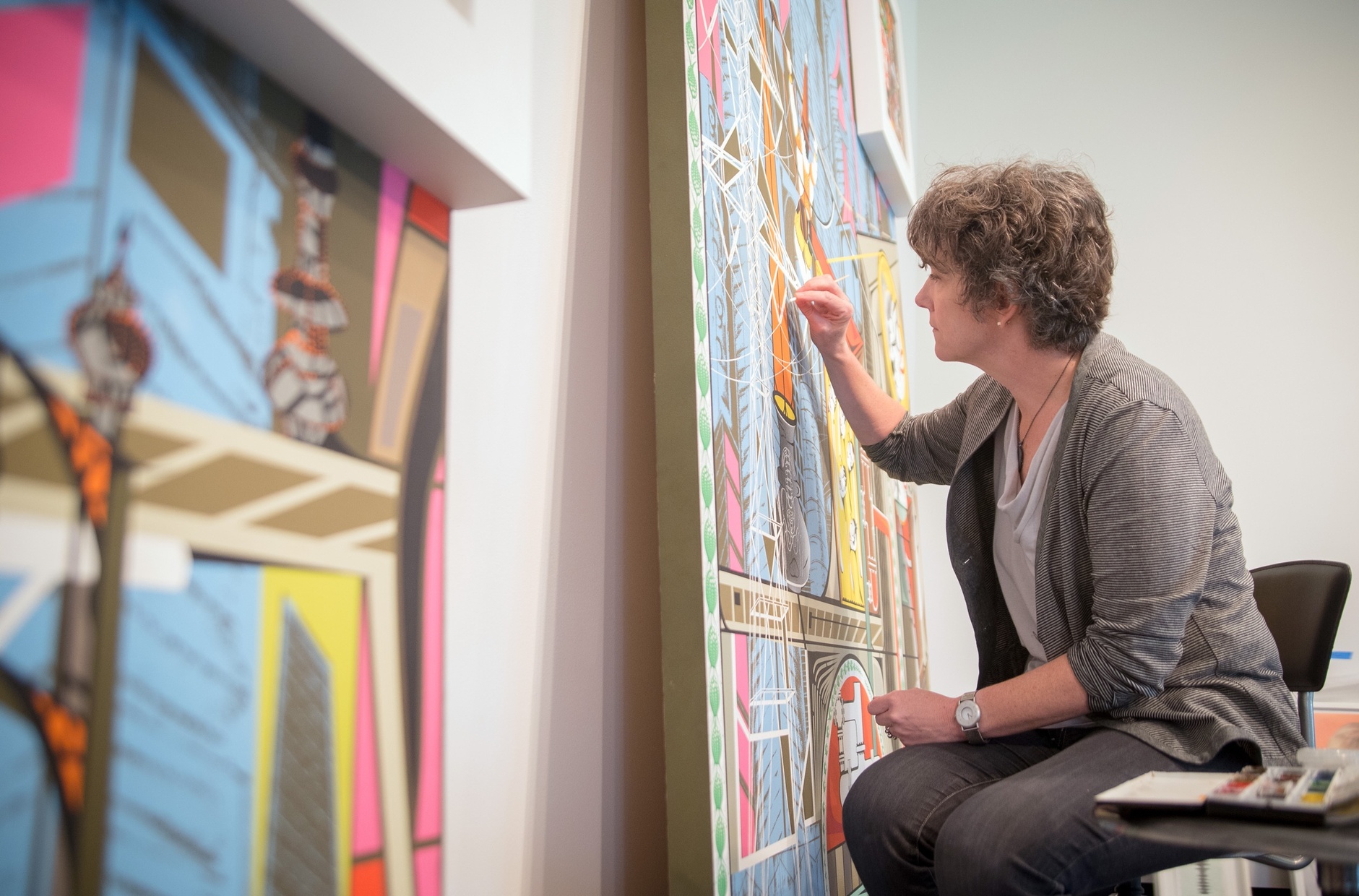 It’s interesting that you have this association with religious paintings in the altarpiece because there are things that your work shares with that tradition, whether consciously or not. A lot of those works have to be conceived mentally and planned out. There’s not a lot of room for mistakes. The types of paints they were using often were flat colors, much like your own work. And there’s not a lot of room for mistake in your own work.

Well, it’s interesting what constitutes a mistake. There are mistakes in the painting. I don’t like pentimenti. I like it in other people’s work, but as a young painter coming of age when very few people were painting in graduate school, I wanted to kind of eschew all the overtly sentimentalized or unnecessarily humanized ideas of what constitutes a painting or a brush stroke. I wanted to erase all of that and make the work purposely look a bit mechanistic.

You have all of these raised drops of paint that create the green bands of decoration—applications of liquid paint upon liquid paint, which have to be done when the panel is flat, correct?

Yes. I never really learned how to make paintings completely on the wall, so I put them on tables. Those raised areas were a way of embroidering or embellishing the surface physically. They were accomplished by putting paint in a Styrofoam cup and then slowly pouring one after the other after the other. And I would get into a zone when I could pour them almost perfectly, almost in the way that a baker would apply a rosette with a pastry nozzle.

They have an amazing consistency. What about in the first panel where there is paint that’s very fluid, and it looks like you just never stopped, you just keep brushing it out like creating ferns. Is that with a brush?

I’m glad you point out that pattern detail. I’m from the Pictures generation, and very few people in the Pictures generation painted. So I was looking at applied art, decorative art, furniture painting, textile design, pottery design and glazing, wallpaper, and needlepoint as ways of resuscitating painting or giving painting CPR of sorts. And in those details, that’s a type of painting technique that you see all through Latin American pottery and in Eastern Europe. You see it in every culture, that type where you take a rounded brush, fully loaded, put it down and pull it up away from the surface to give it that perfect, tangled ending. A lot of those preoccupations come out of my study of things that weren’t part of the canon of fine arts or modernism. It was very purposely, on my part, to signal that I was taking my cues and clues from other areas.

Thinking about how history or canons are written, how do you imagine the work being received today in a very different social climate? You alluded to how we are headed into a divisive time in our country, but we are also living through a time when gender is discussed much more than ever before.

I was always interested in dismantling the gender binary as well as the binary of sexuality. Now, it’s interesting that young kids look at the work and immediately apply the kind of polemics of queer culture or transgenderism or non-conforming gender identity. I love that the work can absorb and continues to absorb these newer cultural nuances. So I’m really happy about that. It makes me very happy. It means that the paintings are still alive.

Originally published in Accelerate: Access & Inclusion at The Tang Teaching Museum 2 (2018)
About Lari Pittman
Los Angeles–based painter Lari Pittman looks to decorative arts, commercial signage, and other areas that exist outside of the mainstream canon of art history for his large-scale, complex, and graphic paintings. His work is in public and private collections around the world, and he has received numerous awards, including from the National Endowment for the Arts, the California Arts Council, and the International Association of Art Critics, among others. He received his BFA and MFA from California Institute of the Arts. Since 1993, he has been a professor of fine arts at the University of California, Los Angeles.
About Heather Galloway
Conservator Heather Galloway, a peer-reviewed Fellow in the American Institute for Conservation of Historic and Artistic Works, has over twenty years of conservation experience working in museums and with private clients. Galloway has a BA in fine arts from Middlebury College, an MA in art history from Williams College, and a Certificate in Conservation from the Conservation Center of the Institute of Fine Arts, New York University.

Give a damn.
Exhibition