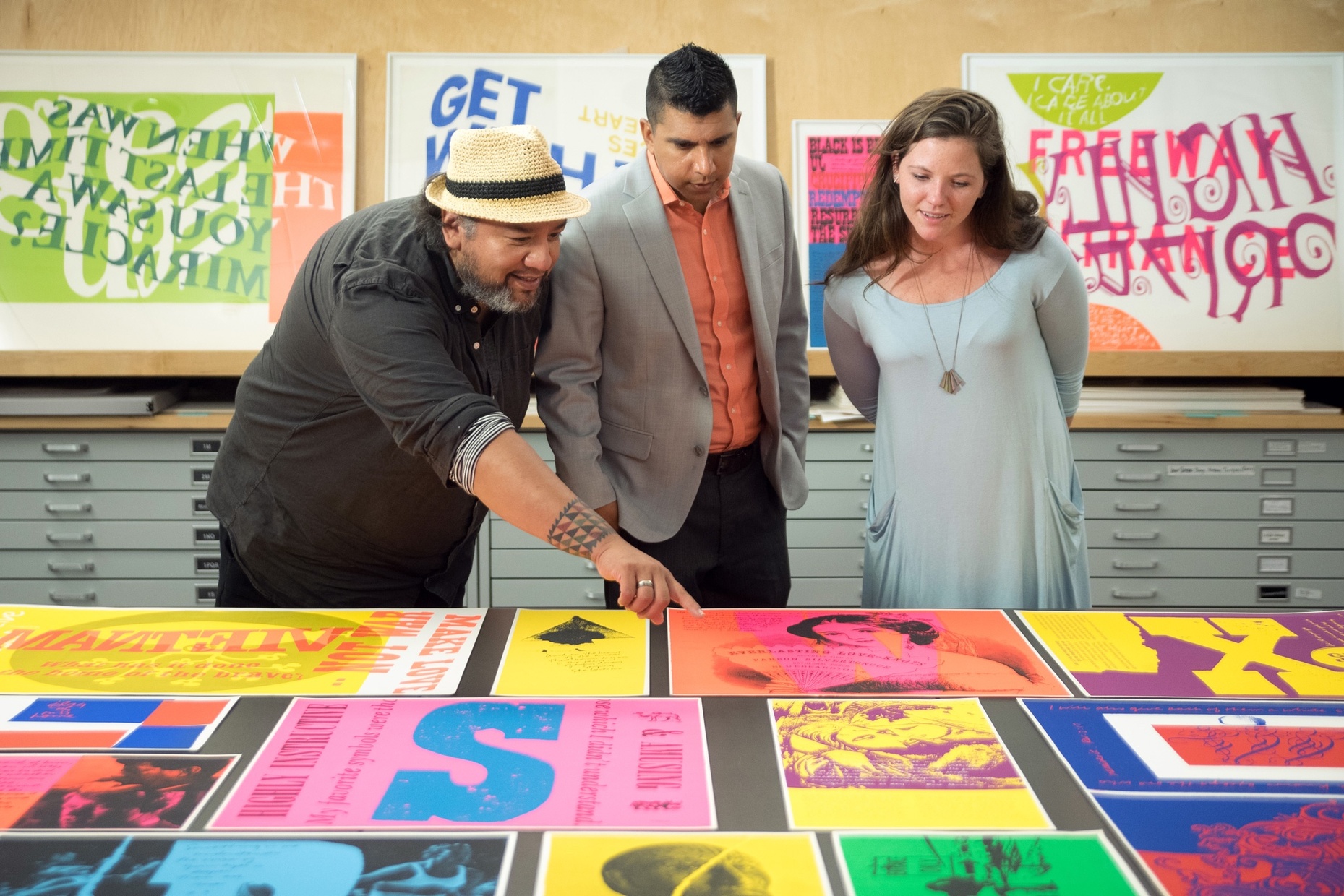 For the last ten years, I have worked with immigrant populations from Oaxaca, Mexico, to understand better the migrant experience to the United States and how immigrants’ children associate with Oaxacan culture. This work has led me to research sports, migration, and identity—topics that are naturally politically charged. I have also worked closely with themes of social justice, particularly with regard to immigration, and at an institutional level with the promotion of diversity and inclusion in higher education. It was along these realms that I met with Dayton Director Ian Berry and Mellon Collections Curator Rebecca McNamara to discuss possible research collaborations. Upon exiting the meeting, I saw several Corita Kent serigraph prints on the Print Room table, and with interest and intrigue I asked, “What are those?” I had never heard of Sister Corita Kent before that moment, but I felt like I knew her work. The prints felt familiar, particularly their vibrant colors. The saturated blues, yellows, and reds lured my attention. Then, the words provoked emotion, feelings related to issues of equality and social justice.

I am a second/third generation Chicano from Northern California.(1) My parents and family were advocates in the social justice movements in and around Sacramento, California, during the 1960s and 1970s. My parents worked with local artists and community organizers to advocate for the Chicano/a community in the area. In the 1970s my father joined a Sacramento-based artist collective called the Royal Chicano Air Force (RCAF), a group influential in creating serigraph posters, murals, performance art, and exhibitions that focused on the promotion of the Chicano/a community.(2) I grew up in a household full of artwork from family friends, and I visited many exhibitions that promoted Chicano/a art at regional galleries like La Raza Galeria Posada or at California State University, Sacramento, where my father worked as the director of Chicano/a studies from 1972 to 2002. In particular, posters that advocated for issues of social justice and equality pervaded the region’s Chicano/a community. As art historian Shifra Goldman points out, “the Bay area and Sacramento led in poster making … Almost invariably, in the 1968 to 1975 period, Chicano posters were communicative and educational. Poster making was taught to the public, especially young people, at Chicano and Raza centers and galleries and in the schools where Chicano artists taught.” (3)

Feeling a strange connection to Corita Kent’s work, I spent part of my summer studying the Tang collection of Kent prints, exploring the link between Kent and the political poster initiatives that are so prominent in the Northern California Chicano/a community. I was assisted by student researcher Lisa Moran ’17, a double-major in anthropology and Spanish and double-minor in Latin American studies and studio art with a printmaking concentration. Within these studies, her work has been closely aligned with themes of social justice and public art projects. In a semester abroad in Bolivia and a second trip there during her senior year, she made an ethnographic documentary film about street art and murals as tools for social change in Bolivia’s major cities. For each of us, researching Kent expanded our knowledge on social justice and art communities in the United States, informing our other work.

In 1947, Kent joined the art department at Immaculate Heart College, and in 1951, she began to produce art with a screenprinting process. In the years that followed, her reputation as an artist and teacher grew. In the 1960s, a student named Karen Boccalero worked under her guidance before attending Temple University’s Tyler School of Art, where she graduated with an MFA in printmaking in 1971. That year, Boccalero returned to Los Angeles and worked with local Chicano/a artists to form the community arts center known as Self Help Graphics & Art—an epicenter for artists to create, produce, and promote their artwork. During the 1970s, Chicano artists Malaquías Montoya, Gronk, Frank Romero, Patssi Valdez, and many others produced work and shared their knowledge of art production with others.(4) The community center is still in operation today and its celebration of Día de los Muertos (Day of the Dead) is arguably one of Boyle Heights’s longest-running traditions.

Corita Kent undoubtedly influenced and encouraged the artistic-political movements of the 1960s and 1970s, but she also influenced many different ethnic and cultural communities and the branches of art and activism that arose from those groups independently. She is at the beginning of a long thread of social justice themes in art, and more specifically the Chicano/a community in Los Angeles, and her work led to the serigraph artistic movements that still resonate with artists and activists in the United States today. Further, her work contains many layers of significance, allowing for her to have relationships with communities to which she may not have belonged. As historian Kristen Guzmán has stated, “Sister Corita had a lasting influence on Karen [Boccalero]’s artistic and community work and, indirectly, on the future artistic development of Self Help Graphics.”(5)

The connection between Corita Kent, Karen Boccalero, and other artists in California and elsewhere is intriguing, but the impact of Kent’s inspiration and artistic production as a process of socially conscious expression needs further study, especially within the canon of art history. In our ongoing research, we are interested in how a dialogue moves in two (or more) directions. During the 1960s and 1970s, was any of Kent’s work politically motivated or culturally influenced by the Chicano/a community of artists and organizers and their silkscreen art? This unique perspective on her life as an artist, activist, and teacher allows us to create a foundation for research that contributes to the disciplines of both art history and Chicano/a studies. We are interested in how some agents of change—particularly Mexican Americans in Los Angeles—have been overlooked in existing literature. How did the Chicano/a community’s silkscreen posters and socially conscious artwork impact and coexist with Kent, Boccalero, and other artists both within and beyond their communities? The question of how we enact social change through visual media, and what communities have done successfully throughout history, is at the epicenter of the project. Research on Corita Kent’s artwork and background with Chicano/a communities in the United States is rarely explored and examining the layers of influence and inspiration in multiple directions adds new perspectives to art history and opens pathways to new readings of Kent’s life and work.

Originally published in Accelerate: Access & Inclusion at The Tang Teaching Museum 1 (2017)
About Bernardo Ramirez Rios
Bernardo Ramirez Rios, PhD, is Assistant Professor of Anthropology at Skidmore College. His research emerges through the humanistic principles of equality and social justice. Rios specializes in the anthropology of sports, transnational migration, and identity studies. He actively works with marginalized groups including indigenous populations in the United States and Mexico.

Someday is Now: The Art of Corita Kent
Publication

Someday is Now:
The Art of Corita Kent
Exhibition
i
Pattern by Abby Fuess ’18
Inspired by the exhibition Other Side: Art, Object, Self
The Tang Pattern Project celebrates the Museum’s 20th anniversary. Organized by Head of Design Jean Tschanz-Egger, past and current Tang Design Interns created patterns inspired by the Museum’s exhibition and event history.
See all patterns